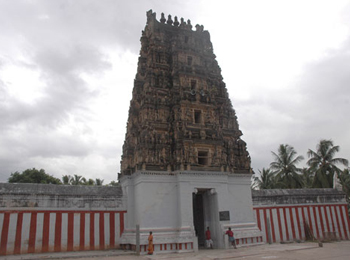 The Kodandapani Ramar Temple is located in Ayodhyapattinam and is dedicated to God Rama. In this temple devotees get to pray to God Rama, Sita, Lakshmana, Sri Anjaneya, Vibishana, Baratha, Sugriva in a clock wise direction. It is a popular belief that praying at this temple at Ayodhyapattinam is equal to visiting Ayodhya (in north India) itself.

After worshipping the Dwarapalakas (security guards in God’s palace – Temples), the devotees will have the darshan of Sri Anjaneya, Satrugna, Bharata, Lord Rama and Mother Sita, Lakshmana, Sugriva and Vibishana in a clockwise manner.

The temple is believed to represent the spiritual ancestry of our temples without any pomp and splendour as the very qualities of Sri Rama (Kalyana Gunas) but majestic in its appearance. The place derived the name as it had the foot prints of Lord Sri Rama. Every stone of the temple bears an immortal poetry. Every pillar is an outstanding example of temple architecture arresting the attention of the visitor. Each produces music when tapped. According to history, this temple was simultaneously constructed by Tirumalai Naicker along with Daramangalam Kailasanathar temple, Tiruchengodu Murugan temple and the Tirumalai Naicker Mahal. The similarity of the sculptures is an evidence of this fact. The sculptures are huge in size; the one depicting the killing of a demon by a divine horse, elephants, Yazhi an animal belonging to the lion family, a lion all in a single stone are a few to mention. Above all, the coronation of Sri Rama is arresting in its beauty. Sri Rama, Mother Sita, Lakshmana, Bharata, Satrugna idols are very beautiful. Tirumalai Naicker appears with his queen in one sculpture. The temple is also noted for its immortal paintings on the ceilings speaking volumes of our spiritual glory. Earlier, Sun rays were setting on the Anjaneyar shrine through the holes of the doors on the poornima of Chithirai (April-May). Due to emergence of buildings around the temple, this is now lost. This is not simply a temple in the sense we know, but also a house of ancient architectural and paintings art of the country.

It is the conclusion of the learned that one need not visit the Ayodhya in the north and it would suffice if they visit the Ayodhyapattinam Sri Ramar Temple near Salem. The sacred benefits they get there are in this temple itself. According to one story, Sri Rama was returning from Lanka to Ayodhya with Mother Sita, Lakshmana, Hanuman, Sugriva, Vibishana and others after killing Ravana in the war. They had to cross the Shaila hills. When they reached the place, they could not proceed further as night had fallen in. They found a small temple where they took rest. But they could not reach Ayodhya in time for the coronation nearing then. The time cannot be missed. Therefore, Sri Rama had his coronation in Ayodhyapattinam itself and what was celebrated in Ayodhya in north was the second one.

Sri Rama Navami is celebrated in the temple very grandly.


The temple is 15 km from Salem old bus stand. The nearest railway station is Salem. The nearest airport is in Trichy.