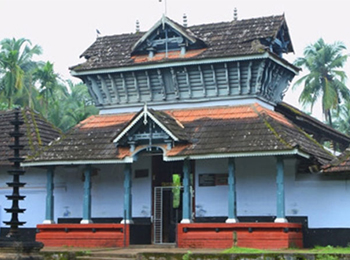 Lord Vettakkorumakan or Vettekkaran is a popular deity worshipped in North Kerala. Some devotees believe that the deity is Kirathamoorthy or Lord Shiva in the form of a hunter. Others consider Him as the son of Lord Kiratha (Shiva in tribal hunter form) and Goddess Kirathi (Parvathi in tribal huntress form). There is another view that Lord Vettakkorumakan is a form of Lord Ayyappa. It's a fact that most of the Vettakkorumakan temples are situated in Malabar region where as most of the Ayyappa temples are situated in Travancore - Cochin region of Kerala.

Balussery Vettackorumakan Kavu is situated east of Quilandy twenty five kilometers from Calicut via karappampu - kakkodi. Navarathri, thiruvonam, vishu are observed with feast. Main offering is breaking of 12,000 coconuts. (Formerly this temple was owned by the Kurumbranad Rajas). The deity of Balussery temple is Vettakkorumaka. There are several temples for Sasta and Ayyappa in the old Travancore and Cochin States and only a few for Vettakkorumakan. The opposite is the case in the Malabar area. Some of the wellknown temples dedicated to Vettakkorumakan are in North. Kerala. These are at Neeleswaram, Kottakal, Balussery etc. because of the fact that he was the family deity of the Rajas of Chirakkal and Neeleswaram and Kottakal. The most famous of these temples is at Balussery Fort, about 25 km. from Calicut. This was once the fort of the Rajas of Kurumbranad. The temple at Balussery is very small without even a flagstaff or altar. The important vazhivadu or offering here is the distribution of meals to those who come here from other places.

The legend of Vettakkorumakan is connected with the Kiratharjuneeyam story in Mahabharatha. During the fifth year of their exile, Arjuna went to the Himalayas to do tapas to obtain the Pashupata Astra, the divine weapon from Lord Shiva. Arjuna did penance for years. Lord Siva was deeply impressed by the austerity of Arjuna and decided to test his courage and devotion. Shiva appeared before Arjuna, assuming the form of Kiratha (hunter), with Parvathi also beside him, dressed as Kirathi (huntress). He causes an asura to disturb Arjuna's penance in the shape of a large wild boar. Incensed at the boar, Arjuna chases it, and shoots an arrow at it to kill. At the same instant, another arrow from the bow of Kiratha also hits the boar. The hunter and Arjuna, from the pride of warriors, argue about whose arrow killed the boar. This leads to an intense duel between the two. Whatever weapon Arjuna cast was countered back by the hunter. Finally, he took up the best of his weapons, which was broken into two! Arjuna took up his sword. It broke into pieces on the shoulder of the foe, as if it was striking steel, or rock. There was no weapon left with Arjuna, everything was swallowed by the wild man.

Arjuna, who feels ashamed at this defeat, turns to the Shivalinga, that he has been worshipping during his penance, and offers it some flowers in prayer. Only to find that the flowers have magically appeared, on the body of the hunter instead. Arjuna could not understand, again. Perhaps the wind was blowing in that direction and the flowers were blown by the wind towards the hunter who was standing nearby. But, continually, every flower that he offered at the Shivalinga that he was worshipping moved away from that image and fell again and again at the feet of the hunter. Arjuna was surprised.

All that he offered, leaves, flowers, hastily moved away from that place and adored the feet of the wild hunter who was tauntingly laughing at his victory over Arjuna. Arjuna realizes the hunter's identity, and falls at hunter's feet. Immediately the hunter and the huntress vanished and they appeared in their true forms of Shiva and Parvathi. Shiva gave him the Pashupata Astra and tells him that he shall be at his disposal even in the future, whenever it was necessary. After giving Arjuna the Pashupata the divine couple wandered in the forest in the same form for some time. During this period they had a son born of extraordinary effulgence and that is Vettakkorumakan.

The boy was very mischievous. Although he killed many Asuras during hunting, he also gave endless trouble to the Devas and Rishis by the free use of his bow and arrows. Unable to bear his mischief they first approached Brahma who expressed his helplessness, as the boy was the son of Lord Shiva. Then they besought the help of Shiva Himself who however dismissed them by saying that he being a boy would be naturally naughty and he would be all right when he grew up. As a last resort they approached Lord Vishnu who took the form of an old hunter and went to the boy.

Vishnu appeared before the boy with a golden churika. The churika was so beautiful that it attracted the boy and he begged for it. Lord Vishnu said him that he will give the churika under one condition. He should behave in a responsible manner by giving up his bow and should protect the people instead of harming them. The boy accepted the conditions and obtained the Churika from Lord Vishnu. Later Shiva sent him to Kerala to protect the land. Vettakkrumakan crossed several mountains and forests and rivers and reached North Kerala where he first reached at Balussery and later visited other places. Keralites welcomed him and started his worship.

How to Reach Sri Kirathamoorthy temple


The NH17 connects Kozhikode to Kannur, Kasargod, Panjim, Mumbai and Mangalore. Public and private buses also ply between states in Kerala. Calicut Station is connected to Ernakulam, Trivandrum, Mumbai and Mangalore by regular trains. Karipur Airport is the closest airport, located 26 ms from Kozhikode and connected to Delhi, Mumbai, Kochi, Chennai, Trichy and Trivandrum. Prepaid taxis are available for reaching the city.

The temple opens at 6 am. Morning rituals like Ganapathy homam, ushapooja, etc are completed by 9.30 am. Vellanivedyam, Pal payasam and Sarkara payasam are placed as offering. Nada closes at 9.30 am.

In the evening temple is open from 5.45 pm. Deepaaradhana is between 6.15- 6.30. Athazha pooja and nivedyam are completed by 7.30 pm. Vellanivedyam and Sarkara Payasam are offered to the deities. Devotees perform Bhajans every day between 6.30 and 7.15.