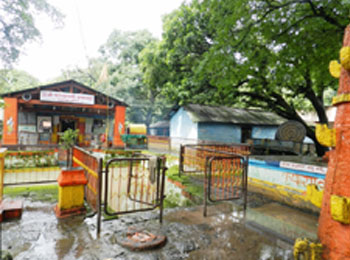 Kolhapur has a peculiar cultural influence owing to various ancient temples. This temple is dedicated to Katyayani.

One of Maa Katyayani Devi Temple is located in Kolhapur. Sri Katyayani Devi Maa Temple is 10 Kilometers away from famous Mahalaxmi temple of Kolhapur and it is also 10 km away from the famous spot of kolhapur Rankala Lake. The main centre of attraction of this temple is the idol of Devi Maa Katyayani. It is said that here is one and only one idol in the stone. Lot of festivals are celebrated here along with the Navratri. The fifth day of Navratri is to be the day of arrival of Devi Mata Katyayani. When one visits that temple, feels the greatness of Devi Katyayani Maa, you get blessed, and get full peace of mind. It is found from historical records that Chhatrapati Shahu, Rajaram and Akkasaheb Maharaj used to visit the temple, on hunting campaign. This temple proves a pleasant relief for Kolhapur citizens tired with the dull, daily drudgery of life.

The goddess Katyayani in Kolhapur takes important place in the pre-historical period. Goddess Mahalaxmi left northern empire and arrived in south in (Karveer) kolhapur maharshtra. But Devi Katyayani, who already resided here, came forward to welcome goddess Mahalaxmi. This Deity is mentioned in the 'Karveer-Mahatmya.' In ancient times the Demon Kolhasur had kept Demon Raktabeej for the protection of this area. In the meantime, Mahalaxmi declared war against Kolhasur and sent Bhairava to suppress Raktabeej. But as soon as he was struck, many demons began to be created out of his blood. So Bhairav was powerless. Then Mahalaxrni at once sent Katyayani who made 'Amrut Kund' (Nectar tank) and kept in it illusionary demons born of blood. Again rejuvenating Bhairav's army, Katyayani destroyed Raktabeej. So goes the mythological story.

The nearest airport is Kolhapur Airport. Kolhapur rail station (Chatrapati Shahu Maharaj) is connected by a good rail network to other. Kolhapur lies on NH4, which connects Mumbai to Bangalore. One can get direct buses to Kolhapur from Mumbai, Pune, Bengaluru, Belgaon, Mangalore and Hubli.

Timing: Morning 6 AM to Evening 9 PM.