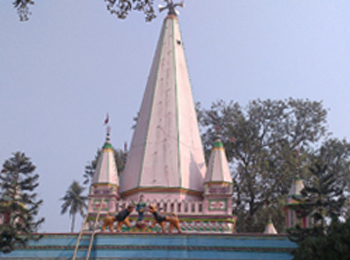 Katyayani Mandir is situated in the Dighri village of Katihar District in Bihar. The temple is also popularly known as Katyayini Astan. Situated on the banks of River Koshi, this place is easily accessible through railways since it is located between Badlaghat and Dhamaraghat stations, which are on Mansi - Saharsa rail route.

The asthan is a group of temples dedicated to Devi Katyayani along with Lord Ram, Lakshman and Devi Janaki. The temple was majorly renovated in the year 1957. As a tradition, devotees visit these temples every Mondays and Fridays to offer their prayers to these deities.

According to local tales, people of this region worship Devi Katyayani in two different forms – either as Sidh Peeth or as Lok Devi (Goddess of Milk Cattles). This is the reason why devotees offer raw milk to the deity.

According to Hindu Mythology, Rishi Katyayan was performing tapas on the banks of River Kaushiki (now Koshi) when Durga Devi is said to have taken the form of a child and had appeared before him. The pious Rishi is said to have considered the child his daughter and hence, she came to be known as Katyayani. Another legend says that around 300 years ago, this region was said to be a thick forest area. One day a devotee named Shripat Maharaj saw Maa Katyayani in his dream, who had asked him to build a temple for her. Accordingly he built an earthen Temple at that location and began worshiping her.

The Katihar Railway Junction is the nearest railway station to the temple. The place is easily accessible through railways.

Frequent and regular bus services are available to reach Katihar. BSRTC operates bus services from Katihar to most of the nearby towns and cities in Bihar and West Bengal.