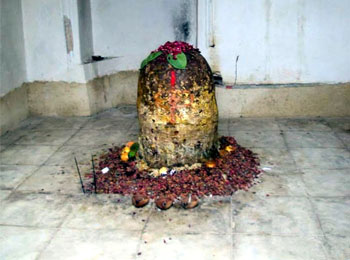 Katasraj Mandir is a Hindu temple complex situated in Katas village near Choa Saidanshah in the Chakwal district of Punjab in Pakistan. Dedicated to Shiva, the temple has, according to Hindu legend, existed since the days of Mahabharata and the Pandava brothers spent a substantial part of their exile at the site and later Krishna himself laid the foundation of this temple and established his hand made Shivling in it. The Pakistan Government is considering nominating the temple complex for World Heritage Site status. In 2007, it also proposed to restore the temple complex. In 2012, the temple pond is drying up due to heavy use of ground water for industrial purposes.

The main deity of the temple is Lord Shiva. Here the Lingam is made up of hand by Pandava brothers.

Prehistoric tools and weapons such as axes and knives made of granite, and artifacts like terracotta bangles and pottery have been unearthed at the Katasraj site. The latter have been found to be similar to those excavated in Harappa, but have not been dated for want of expert opinion. The fascinating Salt Ranges have a vast archaeological treasure still hidden underground. The Salt Ranges have also been yielding prehistoric finds.[3] While some local experts place the fossils discovered in the period between 6000 and 7000 BC, the fact remains that they have not yet been examined by trained palaeontologists of international standing. A large number of bones of the limbs and vertebrae of giant animals resembling the extinct mammoth and dinosaur have been found at some sites. “An entire range of low mountains in the area appears to be fossilized, revealing to the naked eye layer upon layer of a variety of plants and soils,” says one writer. The smaller temples, built in pairs around the larger central temple, were built around 900 years or so ago, although the earliest of them dates back to the latter half of the 6th century AD.

The temple complex was abandoned by Hindus when they migrated to East Punjab in 1947 and no one stayed back. The relationship of Hindus with local Muslim population was very good. Local Muslims even accompanied them to next town Choa Saiden Shah from where the Katas Hindu population proceeded further to India. It has always been the site of holy pilgrimage for people of Hindu faith from northern Punjab.

The Katasraj temple complex is believed to date back to the Mahabharata era. Many legends are associated with the temples. The five Pandava brothers, heroes of the Sanskrit epic the Mahabharata, are said to have stayed here for four of the thirteen years they spent in exile. The lake in the complex is believed to be filled with Shiva's tears and are thus said to have magical powers. The complex is also believed to be the site where one of the Pandava brothers, Yudhishthira, defeated the Yaksha with his wisdom, bringing his brothers back to life.

Another legend involves the death of Shiva's wife Sati; the story goes that when she died he cried so much and for so long that his tears created two holy ponds - one at Pushkara in Ajmer, in modern India, and the other at Ketaksha in modern day Pakistan, which literally means "raining eyes" in Sanskrit. It is from this name that the word Ketas is derived. Another version of the legend mentions the two pools at Katasraj and Nainital.

Yet another version of the Shiva legend involves the death of Shiva's horse Katas instead of that of Sati his consort. Some legends also state that very first Shiva Ling (Sihv-Ling) was in Kattas. some old manuscripts also consider Katas as the janam bhoomi (birthplace) of Hindu incarnation Rama, as well as that of Ayodhya; but this has become quite controversial.The oral tradition by local Hindus never mentioned it as being Rama's birthplace or celebrated in annual rituals.

How to Reach Katasraj Mandir

The Katasraj mandirs are located 40 kilometres from Chakwal District.