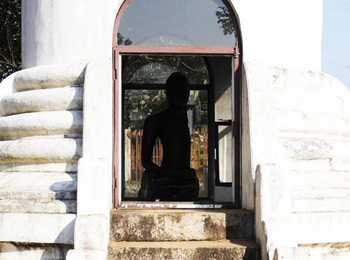 Karumadikuttan Temple is a Buddhist shrine situated at the Karumadi village, in the Alappuzha District of Kerala, India. This Temple is primarily dedicated to Gauthama Buddha.

Karumadikuttan Bhuddha Temple is the only Buddhist temple of the south Indian state Kerala. Buddha is known by the name Karumadikuttan here. The temple has a black granite statue of the deity in the sitting posture. People from many parts of India visit this temple to seek the blessings of Buddha. This temple at Karumadi stands proof to the fact that this region had people from varied religion forming part of it.

The statue of Karumadikuttan Buddha appears in the sitting position and is half broken. Legend has it that an elephant had charged towards the statue, which had left it broken.

History reveals that Buddhism came to Kerala as early as the 3rd century BCE. The religion is said to have well flourished under the rule of the Ay King, Varaguna. The Hindu renaissance during the 8th century CE is said to have lead to the decline of Buddhism in he region. Despite Buddhism not being so popular in the state of Kerala now, several ruined Buddha statues have been unearthed in the coastal districts of the state, especially from districts like Alappuzha (Allepey) and Kollam (Quilon). The Karumadikuttan temple is one of the important Buddhist structures found in the state.

The granite statue of Karumadikuttan Buddha is said to have been brought by Buddhist monks who visited Kerala between the 9th and 11th centuries. They are believed to have entered the state through the port of Alappuzha, carrying the message of love and non-violence. Keralites who had followed Buddhism in the early days are said to have converted to Hinduism which was the most prominent religion of the region. This historically important statue of Buddha at Karumadi is protected by the Archeological Survey of India (ASI).

The Cochin International Airport (around 101 km) is the nearest airport to this place at Alapuzha district.

The district of Alappuzha is well connected to other many towns and cities of the state through frequent and regular bus services.