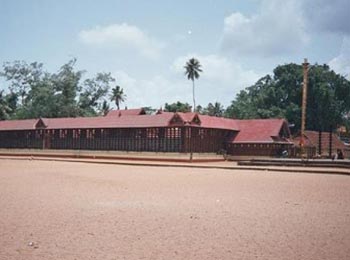 The famous Karthayayani Devi temple is located in Chertala town in Kerala. Goddess Karthayayani is being worshipped in this temple. Right outside the main temple, there are separate temples of Lord Vishnu and Lord Shiva. There are other temples dedicated to other lords, as well.

It is believed that the famous Indian Saint Vilwamangalam Swamiyar consecrated Devi in this temple. While he was going back after consecrating 'Padmanabha Swamy' at Sree Padmanabha Swamy Temple, Thiruvananthapuram he saw Devi at this place and consecrated her in this place is the popular belief. The deity 'Cherthala Karthyayani Devi' is famous as 'Mangalya Dayini' in the sense she provides welfare and prosperity for her devotees and removes obstacles for the marriage of young girls.

Cherthala Karthyayani Devi is famous as "Mangalya Dayani" which means, she provides 'welfare and prosperity' for the devotees and also helps, for removing obstacles in marriage for girls, provides good bridegroom, assures better married life. The etiquette and rituals followed in Cherthala Karthyayani temple, differs a lot from other temples in Kerala.

There is an enchanting legend about the temple. Shivaguru, the father of Adi Sankara, revered Shri Karthyayani Devi for quite a while. One day, when he was not able gone to the temple for his day by day venerate, Aryamba, the mother of Jagadguru Shri Adi Sankara, sent little Sankara to the temple to offer drain. At the point when Shri Sankara achieved the temple, it was shut and couldn't play out the advertising. Little Sankara began crying in disillusionment. Around then, an awesome light showed up from sanctum sanctorum and the drain in his offering vessel depleted. The little Sankara was upbeat that Shri Karthyayani Devi acknowledged his offering, however the kid again cried on the grounds that, a bit of the drain he used to reclaim home as prasada was not there. Devi showed up before him, reassured him and filled the vessel with drain as prasada. It is trusted that, by drinking this drain (Nectar of learning ) Jagadguru Adi Sankara got enlightenment and got to be Jagad Guru, the most famous Hindu savant of the world.

There is a tale about this temple. It appears that Vilwamangalam Swamiyar was coming back to Guruvayur in the wake of sanctifying the Ananthapadmanabha temple in Thiruvananthapuram. He achieved the present Cherthala and was taking rest beneath a Chambaka tree. He saw a few swans swimming in the lakes in that place. All of a sudden he saw a perfect woman swinging in a swing, attached to the Chambaka tree. He perceived her as Goddess Karthyayani and moved toward her, when she hopped into a close-by lake. Despite the fact that Vilwamangalathu Swamiyar hunt down her in the lake, he couldn't find her. The following day likewise he saw her in a similar place and this time she hopped into a moment lake. This proceeded for six days. On the seventh day, the Swamiyar (sage) figured out how to grasp her hair and pulled her up, before she could submerge. He could just draw her head (thala) up, uncovering her neck. Additionally, a few hairs which he was holding got removed. The seventh tank was loaded with slushy mud called "Cher" in Malayalam. Due to this occurrence, the place was called Cherthala. (This being an extraordinary place for coir produce was additionally called Shertala by the British). The present icon has just the head obvious. We can see the gaps from which hairs have been hauled out. So after Abhisheka, this head part of the icon is cleaned utilizing a fabric. Additionally while doing blossom offerings to the Goddess, these parts are secured with a material. It appears, the Swamiyar got irate with her since he was not ready to catch her. Thus, honoring the occasion, in the time of Edavam (May-June), the fans energetically mishandle the goddess amid a pooram celebration.

The Goddess in the sanctum sanctorum is sanctified beneath the floor level. Outside the temple, there are separate hallowed places for Lord Vishnu and Lord Shiva. The fans hand over cockerels as an offering to the goddess Karthyayani. So we can discover a few chickens at this temple. Close to the sanctum sanctorum of the goddess, there are separate holy places for Ganapathy and Lord Dharma Sastha moreover. Simply outside the temple, is where Vilwamangalam Swamiyar is said to have discovered her in a swing.

It appears to be before a gandharva was giving a great deal of inconvenience to the general population around this temple. So the goddess asked for Shastha to educate the gandharva a lesson. Master Sastha went outside and executed the Gandharva. When he was coming back to the temple, the Goddess requested that he remain outside itself, so he can secure the general population. A different temple was worked there. The Sastha in this temple is called Kavu udayon (he who has the employment of security or he who has a Kavu). He grasps a mace. Individuals who are in dread or are assaulted by fiendishness spirits make a mace of wood, shading it and give it as an offering to Kavu udayon. There are two extremely uncommon and exceptional prasadam offerings at this temple. They are called Iratti and Thadi

Usually in other temples of Kerala, during the annual festival, 'Aarattu' is a ritual held once annually. At Chottanikara Devi Temple Aarattu is held every day during festival. At Cherthala Karthyayani Temple 'Aarattu' is held twice every day during the annual festival. Karthika Star day in the Malayalam month of Vrichikam is also well celebrated.

How to Reach Karthyayani Devi Temple