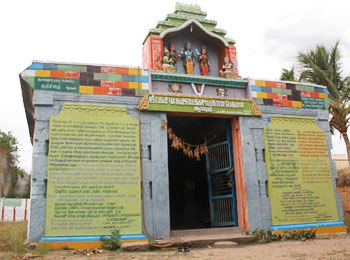 The deity of God Karivaradharja with his consorts Goddess Sridevi and Goddess Bhoodevi is enshrined in the sanctum of Nagadevi, facing the west. The devotees present Tirumanjanam to God Perumal, asking for rain in the region. The deity of Goddess Kamalavalli is enshrined in front of God Perumal’s shine while Goddess Nagadevi’s deity is enshrined adjacent to Goddess Kamalavalli’s shrine. The eagle vehicle of God Vishnu called Garudas is also installed in the temple. The Kamanadheeswarar Temple is constructed opposite this temple and deity of God Ashta Bhairavas is enshrined in it. The devotees can worship both God Vishnu and God Shiva simultaneously at this temple.

During the reign of King Rajarajan, the people living in this area were quiet happy due to the fertility of the land and soon stopped worshipping. God Vishnu then commanded the rain God named Varuna to stop his grace at the region so that there is no rain and the people learn their lesson. Soon there was a drought in the region leading to poverty and famine. The devotees then apologized and worshipped God Vishnu. The God then made the devotees realise that material wealth is not worth more than the devotion towards Gods. He then blessed the region again after the King apologised to the God and the people. The King then constructed this temple and named God Vishnu- Karivaradarajaperumal.

How to reach Karivaradaraja perumal temple

Frequent bus service is available to reach the temple. The devotees can take a bus from Thalaivasal as it is only 7kms away from the temple and 68kms away from Salem.

The Attur Railway Station is nearest to the temple.

The airports of Chennai and Trichy are nearest to the temple.