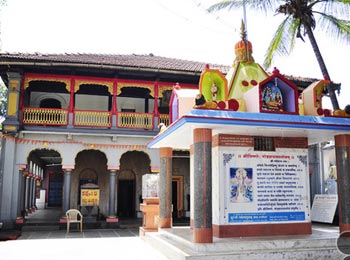 The renowned temple of Kapileshwara is located in the city of Belgaum. The temple is one of the ancient temples of India, which is also called the ‘Dakshina Kashi’. There is a strong belief among thee devotees that the pilgrimage to the 12 jyotirlingas in India remains incomplete, without paying a visit to this holy temple.

The chief deity of this temple is Lord Kapileshwara Temple who is a form of Lord Shiva. The deity Lord Kapileshwra is believed to have self originated in the form of a Linga. The temple complex also houses maller shrines dedicated to Lord Ganesha, Sri Sai Baba, Hanuman and Lord Dattatreya. A separate shrine for the nine planet gods, the Navagraha is also found within the same compound. Right in the center of the courtyard, is the statue of Lord Shiva which rests on a tiny pond. On praying the deity with closed hands, the devotees pour water from pond over the statue. Devotees visit he temple especially in the early mornings and evenings to worship the Lord and sing hymns in his praise. The idol of Kalbhairava is seen at a corner. Kalabhairava is believed to be an incarnation of Lord Shiva. Devotees also visit the shrine of Sri Sai Baba who is a highly revered saint. Many ancient stone idols are also found within the compound. The rudraksh Malta (rosary made from the seeds of Elaeocarpus tree) and other items needed for performing a pooja are available from the temple counter.

Kapileshwara Temple is one of the oldest temples in India. Archaeologists have found evidence about this temple in the inscriptions found at Kamal Basti, dating back to 1204 A D. The temple is believed to have been established by Maharishi Kapila. This is also the reason why the temple got to be known as the Kapileshwara temple.

Mahashivrathri is the major festival celebrated at this temple. People throng this temple in large numbers on this occasion to worship the Lord. Women offer prayers to the lord on this occasion for the well being of their husbands. Abhishekas are performed on the Shivalingas, which involves the bathing of the sacred Lingas in water, milk, honey and curd. Commodities such as betel-nut leaves, flowers and fruits are offered to the deity. This ritual signifies the purity, posterity and longevity of a person’s soul.

How to Reach Belgaum

The Sambre airport is the closest airport to Belgaum which is located at a distance of 10 km from the city, on the SH20. The SpiceJet airlines have announced daily flights to Bangalore starting from 2012.

Belgaum is located on the main railway line, which has become a part of south western division of the Indian railways. The place is well linked to other major destinations such as Bangalore, Mysore, Mangalore, Pune, Mumbai, Hyderabad, Goa, New Delhi and Chennai with regular trains. This station is considered the oldest railway station in this region.

Belgaum is well connected to many major towns and cities of the country through regular buses services.