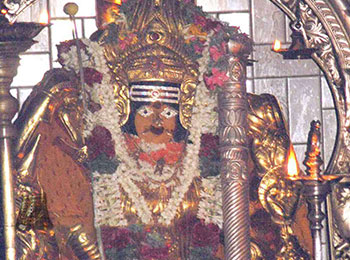 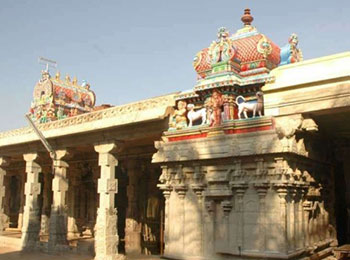 Goddess Kannudaya Nayaki is very fond of Kaliyattam festival celebrated once in 12 years as the Kumbakonam Mahamaham festival. There are two houses in Pazhaya Valaivu in Nattarasankottai designated for this festival, one called Kalla Veettu Kaliyatta Veedu and the other Kanakku Veetu Kaliyatta Veedu. These two groups belong to Karanakaras comprising of five families. The festival is being observed with these two groups. Their houses are built with a foundation of burnt bricks, the second stage with raw bricks and again with two lines of burnt bricks. The roof is made of wooden frames and tiles.

Inside the house, the walls are painted with deity with two poojaris (priests) on both sides, Vinayaka, Veerabadra and Bhairava and other sub-deities, (parivaramurthis), Madukari and dwarapalakas (security guards) on the four sides. On the outer side rear wall, two bhoothas are pained. During the festival period, the houses built earlier for the previous festival would be demolished and built anew with pictures painted as described above. All these works are undertaken on an auspicious day before the first Tuesday of Chithirai (April-May) and other ceremonies would follow in order. This is a 22nd day festival. Nagarathar people will bring two pots (Karaka kudam) and place them in each house. The Mulaikottu (sowing seeds in small mud bowls) grow into saplings symbolizing that all good things should grow aplenty, in both houses with concerned people and offer them betels, nuts, sandal on the first day after the proper poojas to the deity, both in the morning and evening. During the evening, poojas are performed in the Nayanmar kulam also. Elaborate ceremonies are performed on the 22nd day. After taking oil bath, a sheep is sacrificed in a place specially prepared for the purpose in such a way that the blood does not spill on the while linen spread in the place. The sheep will be removed so quickly at a lightning speed. The head and the body of the sheep are separated with a single stroke by a poojari. After this sacrifice, the Madhu pots (may be called toddy pots) brought earlier here will be brought to the temple. Then Soolattu pooja is performed when only the couple of Karanakara family alone would be present. This is called Peria Padayal. From day 24 to 29, the poojaris alone would be performing the ceremonies in the Kaliattu houses. On the evening of 29th day, having an oil bath in a spring called Sengamathan Oorani, girls who had not attained puberty would be bringing the Madhukudams (pots) all decorated. Further sacrifices would be followed in the two houses then. All the crops grown in mud bowls would be collected and placed the temple tank finally. The poojaris also leave for their respective Kaliattu houses.

The last festival was celebrated in the year 1995 for 22 days. The Goddess is a Swayambumurthi in the temple. The Goddess is dressed with the Golden Angi on the first Fridays of the month contributed and arranged by the Nagarathar community in Singapore. 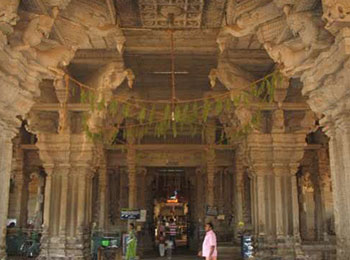 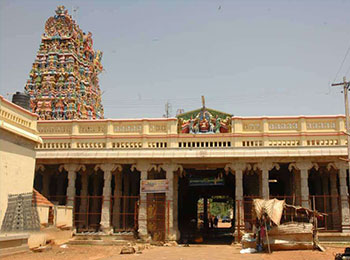 The temple was born out of a hidden idol that was not seen by people who hit a stumbling block. The Goddess appeared in the king's dream to tell him that it was She who was there. Two kilometers south of Nattarasankottai, there are some villages in the forest area called Pirandakulam, Allur and Panangadi. Buttermilk vendors from these villages could not proceed after a particular point as they were hit by some power and lost the buttermilk and so had to go back with empty hands. Scared and confused, they took the matter to the king in Sivaganga. A day before their meeting with the king, Goddess appeared in his dream and told him that She was under the earth in Pirandakulam village near a jackfruit tree. The king told the people of his dream and went along with them to the place mentioned by the Goddess. He asked the people to dig the place. While one man was engaged in the work, the crowbar hit his eye causing bleeding. While another man offered to continue the work, the first man said that he would do it himself and brought the idol out. The moment the idol came out of the earth his eye injury was completely cured and bleeding stopped. As the Goddess restored his vision, She was named Kannathal, the Goddess who gave eyes. Kan in Tamil means eye. While the people of the Yadava community were taking the idol northward, they could not carry it further from a particular spot and placed the idol facing east in Nayanmarkulam village. The Goddess directed the Nagarathar people to perform a Kaliyattam and offer a sacrifice. The Nagarathar assembled, formed two groups as Kallar belonging to the bride side and a bridegroom side called Kanakkupillais. It was decided to perform poojas in the mornings and evenings and sacrifice 1, 500 sheep from the Nayanmar community. Not a single drop of blood came out from the 1, 499 sheeps. Blood came from the last sheep making the number to 1, 500 when the idol began to move. It was placed south of the Shiva temple in a place called Virakandan Urani. Next day, when people went there, they found the idol facing north. It was brought the same way. A voice from the sky said that the idol may be installed in the place where the sanctum sanctorum existed. Poojas were conducted by the Bangle Community (Valayar kulam people). After a few days, Goddess ordered that those belonging to Uvachar Community alone should perform the poojas. Till now only this community is enjoying the privilege of being the priests of this temple. It would be worth mentioning here that the great Tamil poet Kavi Chakravarti Kamban who wrote the Ramayana in Tamil belonged to this community and is mentioned as Tiruvazhundur Uvachan in Tamil history. 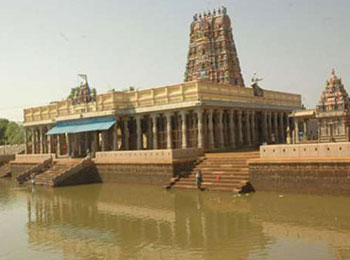 The Pujas in the temple are performed by Uvachar dynasty belonging to the Parasaiva community. The hoisting of the flag for the Brahmmotsava festival begins in the presence of Sivacharyas and Sri Vaishnava Battacharyas according to Agama (procedure) rules. This is 10 day festival in Vaikasi (May-June). 10 day Aipasi (October-November) Kolatta festival, 10 day Thailakappu festival in Thai (January-February) and the Tuesday (Sevvai) festival are very famous. 48 days Kaliyatta Vizha is celebrated once in 12 years. During these days, Goddess graces from two houses in the form of paintings on the walls. Kaliyatta Kannudai Nayaki graces in a sitting form in a silver chariot with 8 hands on the Swati Star day in the month of Vaikasi (May-June). It is a procession of pleasing royal elegance. 10 day Mulaikottu festival is celebrated in Adi month (July-August). The seeds are sown in 9 earthern bowls and 1 golden bowl.

The golden bowl is carried by the deity Adi Poornima day in a grand procession in the morning. 10 day Navaratri festival is celebrated in Purattasi (September-October). After 9 days celebrations in the temple, on the 10th day, Vijayadasami day, Goddess comes in procession on a horse Vahana-vehicle. During the Navaratri festivals, Laksharchanas (performing archanas chanting the glory of the Goddess with one lakh names) are performed. On the Tirukarthika day, Mother Kannudaya Nayaki graces the devotees in a procession on the Swan Vahana. The Chokkapanai is burnt that day. This is a tall post covered by palm leaves, lighting a lamp at the top. After lighting this top lamp, the Chokkapanai is burnt from the bottom.

Details of daily pujas – Vila puja at 7.30 a.m.; 2nd Kalasandhi puja at 8.30 a.m.; Uchikala puja (afternoon: at 12.30 p.m.; Syaraksha puja (evening) after opening the temple at 4.00 p.m.; Arthajama puja (night) at 8.30. The Goddess is dressed with the Golden Angi on the first Fridays of the month contributed and arranged by the Nagarathar community in Singapore.

Bus services are available to Sivaganga which is 8 km away from Nattarasankottai. From there one can reach the temple by autos which take around 15min.

Nearest railway station to reach Sri Kannudayanayaki Amman temple is Sivaganaga Railway Station which is 8km away. Buses and autos are available from here to access the temple.

Nearest airport to reach Sri Kannudayanayaki Amman temple is Madurai Airport which is 59km away. From here bus and taxi services are available to access the temple.