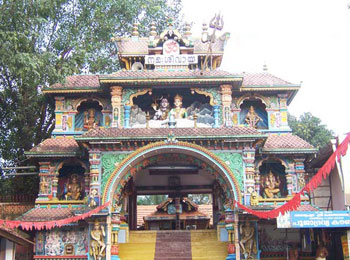 Kanjiramattom Sri Mahadeva Temple, situated on the river banks of Thodupuzha River at Kanjiramattom Kara (land), Thopdupuzha Taluk, is one of the ancient temples in Idukki District, Kerala. The temple with its divinity and serenity situated nearly 1.5 km south east of the Thodupuzha KSRTC Bus stand spreads the divine enchanting feeling to the native worshippers.

The temple enshrines Lord Shiva as the presiding deity. Other deities worshipped include Lord Ganesh and Lord Hanuman.

The Temple History reveals that nearly 1600 years ago the Vadakkumkoor Dynasty with its headquarters at Karikode ruled this area. The Vadakkum koor dynasty decided to construct a Devi Temple on the shore of Thodupuzha River and a Mahadeva Temple at nearby their Palace at Karikode. The construction went in progress and at Karikode a Round Sreekovil was completed and also Nandikesan was placed with in the compound of the Temple. But Devi, the Family Goddess of the Vadakkumkoor Dynasty housed herself in that temple at Karikode near the palace. At the circumstance sivalinga prathista (Umamaheswara) done in kanjiramattom temple near thodupuzha river.

History reads that Lord Mahadeva in camouflage in the journey with Parvathy came near the river side. Siva and Parvathy sat nearby the hilltop (sailam) after his bath in the river awaiting Parvathy. Parvathy after bath joined Mahadeva in the sailam. The idol of NANDI donated by a devotee is now placed recently in the Mahadeva temple at Kanjiramattom. But a beautiful century old NANDI seen at Karikode Devi Temple confirms the above truth in it. It can be noted that a Nandi can nowhere be seen in any of the Devi Temples in Kerala except at Karikode.

Lord Mahadeva with Parvathi Devi is the idol in the main Sreekovil supported by Durga Devi and Amrutha kalasa Sastha in separate independent Sreekovil nearby the main Sreekovil with in the compound.biogas plant was also installed to scientifically process the waste and the gas is used in the temple as permitted by the Thanthri.After the construction of the temple the Raja relinquished the right over the temple and its related properties free of tax to the Chalamkodu Mana of Thondikuzha Kara and Nadayappilly Mana Vengalloor Kara. But by the efflux of time the above two mana became extinct and the Medanga Mana Namboothiries inherited the Oorayma of the temple and property and become the title holder of the Mahadeva temple at Kanjiramattam.The present Oorayma of the temple vests with the Medanga Mana Namboodiries. The old generation still remembers those good old days even after independent and till the implementation of Land Reforms act wherein paddy was being brought to temple in bullock cart and by head load from different places like Pokalathu Padam, Vandamattam Padam, Vengallore Padam, Thekkumbhagam Padam and from Udambannor etc.

The present Nalambalam was originally thatched with grass brought by the Araya People from various hilly places nearby head load from Kulamavu and Ayyappancovil . Thereafter by 1890 it was replaced by the tiles brought from Vaikom through rivers in Kettuvallam to the Kadavu in front of the temple from where it was removed by head load. Those Kettuvallam returned to Vaikom with coconut collected from these areas.

Since the Medangamana Namboothiries had other temples at Moovattupuzha, Irinjalakuda etc.They could not personally supervise the day to day affairs, supervision and management of the Sree Mahadeva Temple at Kanjiramattam.Hence for the prompt management they entrusted the governing of the temple to the local Manager (Karyasthan) for each temple. Thus by 1900, Kanjiramattam Sree Mahadeva Temple was entrusted with Sree Ramankutty Pillai, Varapetty (Inchiyur) for the prompt and proper management as the Karyasrhan. After 25 years Kunchu Nair, Veliyathu, Kanjiramattam was appointed as the Manager (Karyasthan) and he continued there till 1953.

The Karyasthan during 1953-1954 period was seer Sankaran Nair, Mariyil, who was succeeded by Vengalloor Kalappura Sir for three years. There after Sree Subramania Iyer (Valiyaswamy), Pattathiyarmadam was the Karyasthan for Thirty years from 1957 who had handed over charge to his brotherâ™s son Mr.Ramachandra Iyer. By the efflux of time Kshethra Oorayma became the Jenmi, Manager as Pattakkaran and those worked in the land became Kudiyan resulting the loss of the vast temple property in to the hands of others. Land Reforms Act and other social legislations and changes aggravated the process. The property where in the present Newman College is situated was sold for only Rs.12,000/- then by the Karyashan and Medangamana Namboothiri Knowingly.

The Devaprashnam conducted in 1990 and subsequent Ashtabanda Kalasam and other rectification and poojas and other requisite rituals were conducted by a committee of local devotees. Kalasam was conducted in the right way and as desired by Mahadeva and hence the Management of the temple is being now carried out in a very divine and disciplined way by the elected committee of the devotees and as allowed by the Medangamana Namboothiri and their issues and there by Sree Mahadeva Temple now attained all its full grace, prosperity and divinity.

Nearly thirty years before the inception of the present Committee the Hindus understood the necessity of uniting together for the protection Hinduism and its Values and to fight against cast prejudice worked for the Hindu Unity centering the Mahadeva Temple. As a result the present Anapanthal was constructed in the leader ship of RSS voluntiers and the manager Valiya swamy . The subsequent improvement of the temple after 1990 till this day is clearly visible to those who visits the temple.

Mahashivaratri celebrated here is a major draw attended by thousands of devotees from far and near.

How To Reach Thodupuzha

Thodupuzha does not have an airport. Nearest airport is Kochi Airport.

Instead of Thodupuzha you can a get a train to Kuruppanthara on regular basis.

There are regular buses from other major cities of the country to Thodupuzha.