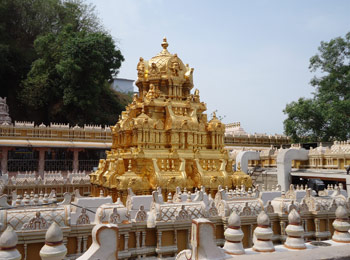 Kanakadurgamma Temple is situated on the banks of River Krishna in Vijayawada. It is a swayambu, a self-manifested temple. It is one of the largest temples in India and the second largest temple in Andhra Pradesh. Temple commonly called as Vijayawada Kanaka Durgamma Temple, in the Krithayuga goddess Durga killed Mahishasura who was a disaster for World. Then goddess Durga shone on the Keela Mountain with eight arms in the form of MAHISHASURA MARDINI as she had given boon to keela. On this mountain, goddess Durga had been glowing with the lighting of crores of suns, with golden colour. Since that, Indra and all the deities praised her chanting "KANAKA DURGA" and they had been worshipping her daily. 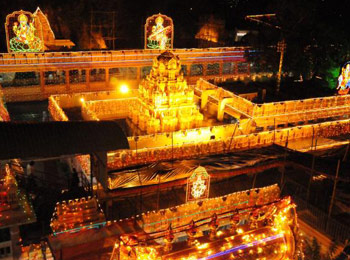 Kanaka Durga Temple is synonymous with Vijayawada. It is mentioned in the sacred texts. This is the place where Arjuna obtained the Pasupatha astra after his great penance for Lord Shiva. The temple was constructed for Goddess Durga by Arjuna. It is connected by steps and a ghats road. The temple occupies an important place in the scriptures as several of the Siva-leelas and Shakti-mahimas were enacted on or around it, making the region a place of unequaled spiritual significance and attracting pilgrims since times immemorial. It is mentioned in the Vedas that the deity in the Kanakadurga temple is regarded as 'Swayambhu' or self-manifested, hence considered very powerful. Inscriptions of different dynasties are found in the temple. 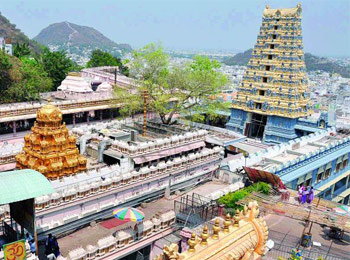 In good olden days a Yaksha named ‘KEELA’ had been performing awful penance about holiest goddess Durga. Goddess Durga was pleased by his penance and appeared to him. She asked him to beg a boon. Keela was so happy by the words of goddess Durga and begged like this, “O holy Mother! You should always be in my heart. This is the one and only my desire”. Listened goddess Durga and gave the boon with showering the lunar lights of smile and said, “My Son! You remain here at these holiest planes of river Krishna in the form of mountain. In Krithayuga, after the assassination of demons, I will remain in your heart”.

As such, by the order of goddess Durga, Keela had been waiting in the form of mountain for goddess Durga. After sometime, in the Krithayuga goddess Durga killed Mahishasura who was a disaster for World. Then goddess Durga shined on the Keela mountain with eight arms in the form of MAHISHASURA MARDINI as she had given boon to keela. On this mountain, goddess Durga had been glowing with the lighting of crores of suns, with golden colour. Since that, Indra and all the deities praised her chanting “KANAKA DURGA” and they had been worshipping her daily. This mountain has attained the name “INDRAKEELADRI” from those times, since all the deities are visiting this mountain. Likewise, since goddess Durga shined on this mountain with golden colour glowing, the name ‘KANAKACHALA’ also attained by this mountain. Holy Indrakeeladri Mountain became holiest after prevailing goddess Durga on this. Then Brahma Deva had a sacred intution that Lord Siva also should prevail on this mountain. For this holy purpose, he had performed ‘Sata Aswamedha Yaga’. By this, lord Maheswara pleased with his devotion and rested in the form of ‘Jyothirlinga’ on this mountain. By the first time, Brama Deva worshipped lord Siva with Jasmin flowers (Mallika) with great devotion. Since Lord Siva was worshipped with Jasmin flowers by Brahma Deva, he has attained the name. ‘MALLIKESA’. After this, in Dwaparayuga Arjuna, middle one of the Pandavas, awfully penanced about Parameswara, seeking ‘Pasupatastra’. Parameswara wanted to test Arjuna and fau,ght with him. Finally Lord Siva pleased with the devotion and dauntlessness of Arjuna and offered him Pasupatastra. From that day ‘MALLIKESA’ had attained the name ‘MALLIKESWARA’ since he faught with Arjuna with greatest bravery. Days were passing on and on. In Kaliyuga, Jagadguru Sri Adi Sankaracharya observed that the Malleswara Jyothirlinga was in bad invisible condition and he reÂ­installed Malleswara Swamy at the Northern Part to the temple of Goddess Durga. From that day onwards, Malleswara Swamy also has been worshiping by all the devotees. Since goddess Durga has been prevailing at the Southern direction to Lord Malleswara, this Indrakeeladri renowned in the World as power prominent centre the “KANAKA DURGA KSHETRA”

The temple of Kanaka Durga the Goddess of power, riches and benevolence and the presiding deity of Vijayawada, is swarmed by lakhs of pilgrims for worship during the “Navarathri” festival which is celebrated with Religious fervour, pomp and festivity. The small but ancient temple of Kanaka Durga , a top the Indrakeeladri hill on the banks of the Sacred river Krishna in Vijayawada abounds with legends of historical interest. Indrakeeladri is unique in that it has been the chosen abode of Kanaka Durga and Her consort Malleswara as Swayambhu (the self-existent one). Here Durga is one the right side of Malleswara as against the tradition of Goddesses taking their position on the left of their consorts. This shows that Shakthi is predominant on the Indrakeeladri.

Legend has it that the demons acquired great powers by appeasing the Gods and began harassing the sages on the earth. Goddess Parvathi assumed various forms to kill these demons. It was kausiki to kill Sumbhu and Nisambhu, Mahisasura Mardini to kill Mahishasura and Durga to kill Durgamasura. “Kanaka Durga because she was aglow with golden hues, and prayed Her to stay on earth and bless them. Kanaka Durga asked Keeludu an ardent devotee to take the form of hill to enable Her stay on him. Thus Keeladri became the abode of Durga. She took the form of Mahisasura Mardini with eight arms holding different weapons, riding on a lion and trampling Mahishasura on the hill of Indrakeeladri. Her consort Shiva took his place on an adjacent hillrock as Jyothirlinga. He was worshipped by Lord Brahma with jasmines (Mallelu) whereby he got the name of Malleswara Swamy. As celestial beings like Indra visited the place, the hill came to be called Indrakeeladri.

Here it was according to another legend, that Arjuna performed penance and fought with Lord Shiva, who had appeared in the guise of Kiratha to win pasupathastra, the most powerful weapon. So this place is also called phalguna theertha. When Indrakeeladri came in the way of the River Krishna the Gods requested the hill to allow the river to pass through it to join the sea. Keeludu obliged and gave a small passage for the river. But the ferocious Krishna made the passage larger than permitted and carried a part of the hill four miles downstream to Yanamalakuduru, where there is now a hillrock called “Thelukonda” or floating hillrock. According to another legend, Kanaka Durga borrowed the nose-stud of the Krishna and to avoid returning it jumped up the hill. Krishna vowed to take back her ornament by raising her level to the hill top by the end of Kaliyuga. Adi-Sankaracharya visited the temple and installed the Srichakra and initiated workship of Kanaka Durga in vedic ways. Hiuan Tsang, a Chinese traveler wrote that he has seen many stone inscriptions in the vicinity of the temple that revealed historic events.

Palakethu Bhupaludu made two inscriptions in the period 1150-1240 A.D. One related to unimpeaching Madhava Varma the ruler of this area. The son of poor women was killed when he fell under the wheels of the chariot of the king’s son.When she sought justice, Madhava Varma’s advisers said that he should be punished with death. But they felt that the offender being the son of the king, could be spared the punishment. When Madhava Varma shown his impartiality by punishing his son with death, there rained gold on Vijayawada and both the boys were blessed to live again.

In yet another incident Malleswara stood by one of his staunch devotees Sripathi Pandithaiah, who believed there was no other God by Malleswara; and his stubbornness made the people ostracize him and he was even refused fire. The enraged Pandithaiah sought the blessings of Malleswara and cursed the people that they would not get fire any more, for he had taken possession of it, packed it in a silk cloth and hung it on a branch of a Sami Vriksham. The people had to apologise to Pandithaiah at the instance of their King, to get back the fire. 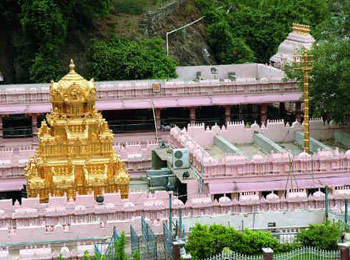 Dasara Navaratri Festival will be conducted in a Grand manner in Aswiyuja Masam (Sudha Padyami to Dasami) in every year. Teppothsavam is being conducted on Vijaya Dasami Day every yearin Krishna River. Bhavani Deeksha Viramana will be conducted on large scale in every KarthikaMasam where lakhs of devotees visit the temple Vasantha Navaratrulu and Varshika Kalyana Brahmoth- savams are being conducted in Chaitra Masama on these days Ammavari Archana will be performed lakhs of lowers every day. Sakambari Ammavari Uthsavam is performed in Ashadamasam every year 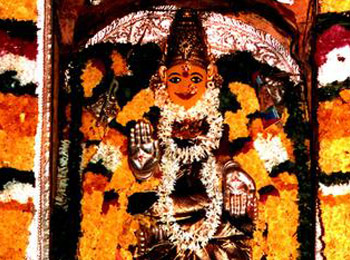 Vijayawada is an important link in connecting the three regions of Andhra Pradesh and is a major transit point. Two National Highways, the National Highway 5 from Chennai to Calcutta and the National Highway 9 from Machilipatnam to Hyderabad pass through the city connecting it to other parts of the country. It is connected to other areas of the state, by state highways and district roads. Good motorable roads connect Vijayawada with all the places within the state and also with the major cities in India. Transport by road from Vijayawada to all the places of Buddhist interest is available in the form of Andhra Pradesh State Road Transport Corporation (APSRTC) buses. Tourist Taxis, Metered Taxis, Auto rickshaws, and Cycle Rickshaws are available. The Andhra Pradesh State Road Transport Corporation (APSRTC) operates point-to-point bus services, which connect important places within the city with each other.

The domestic airport located at Gannavaram, about 20-km, from the city connects Vijayawada to Hyderabad and Vishakhapatnam. It’s about a 30-minute flight from Hyderabad.

Situated along the Chennai- Howrah and Chennai-Delhi rail route, this is the largest railway junction of the South Central Railway. There are a number of express and super fast trains that connect Vijayawada with almost all the important places of the country.