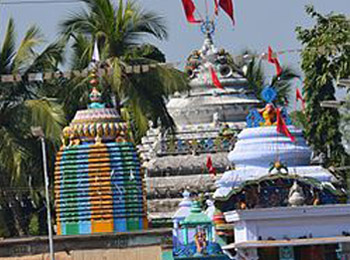 The Kanaka Durga temple is located in a village called Raulapalli in the Ganjam distict of Orissa. The temple is situated over a small hill and is dedicated to Goddess Mahishamardini. From the temple’s architecture style and few local inscriptions that were found, it can be deduced that the temple was renovated around the early 19th century, on account of damage to the original temple. The temple is considered a Pancharatha shrine, qualifying the various criteria’s of a Kalingan temple. It consists of a Rekha deula (vimana), Pidha deula (jagamohana), Pidha deula (natamandapa). The presiding deity of this shrine is Maa Durga, who is in the form of Goddess Mahishasuramardhini. The Goddess is seen possessing six hands and is slaying the evil demon Mahishasura. The festival of Durga Puja is the most important festival of this shrine, which is celebrated with utmost devotion and joy by the devotees.

The temple is primarily dedicated to the six-armed goddess Mahisasuramardini, who is a form of Goddess Durga Devi. Other deities of the temple include Lord Brahma, Ganesa, Sivani, Lord Visnu, Kartikeya, Nandi Dev etc. The temple greatly resembles the Kalingan style of architecture. It is decorated with beautiful ornaments and is built in accordance to the Ashlar dry masonry. Khandolite stone and lime plaster are applied on the exteriors of the temple. The temple is said to be renovated around the early 19th century, since the old temple is believed to have been damaged.

How to reach Kanaka Durga temple

The shrine is situated about 6km from Jaugada, Orissa. Taxis or buses can be got from Berhampur via Purushottampur to Pandia and then to Raulapalli. The closest railway station is located at Berhampur.