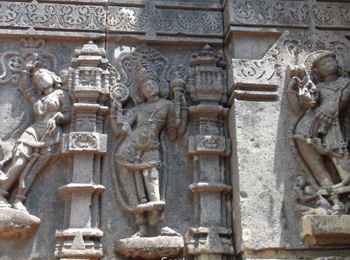 It is constructed in the Besara style which combines both, the North Indian Nagara and South Indian Chalukya styles. It is a small, rectangular structure. The exteriors of the temple are well preserved and have great sculptures. The most dominant of these are the Salabhanjikas. They are well embellished with several ornaments and attires. The most prominent of these is the sculpture of a woman who is seen writing an epigraph in Kannada. The Besara architecture style which is a fusion of the North and South Indian temple styles is seen here. Women are seen writing an epigraph and this is perhaps the only kind of sculpture that specifically refers to female literacy in Brahmanical society in Medieval India. The sculptures of Jalasangvi are said to be an inspiration for the Hoysalas to have built bracket figures in the temples at Somanathapura, Halebidu and Belur. The sculpture of Shasana Sundari (Shilabalika), a mythological woman is seen behind the Kaleshwara temple writing Shasanas.

How to Reach Bidar

Airport in Hyderabad is the nearest airport of the city. Railway station of the city is well connected with other cities and states. One can easily get regular buses to Bidar from other major cities of the country.