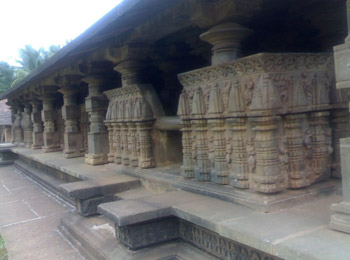 The Kamala Narayana temple is a Hindu shrine located 5km from Kittoor in Degoan, at the Belgaum district of Karnataka. The temple is believed to have been built by Queen Kamala Devi of the Kadamaba dynasty during the 12th century AD.

The village of Degoan is said to have got its name from the name of the temple complex that’s located in the region – Devagrama. Devagrama is a Kanada word which means ‘village of the God’. The Kamala Narayana Temple is an architectural marvel. The shrine is devoted to Lord Narayana popularly called the Maha Vishnu. With lovely sculptures and carvings all around, the temple stands as one of the popular tourist attractions of the district.

How to reach Kamala Narayana Temple

Buses are available from Belgaum to Kittur or Halsi and again from there to Degaon.