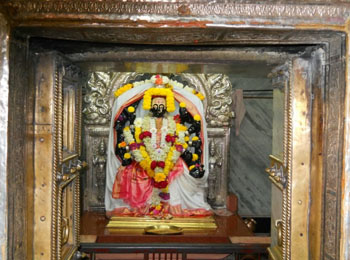 
Kharmala is a famous city and a municipal council in Solapur district of Maharashtra State. The town got this name ‘Kharmala’ after Karme-Maula who promoted the Islamic teaching during the period of Nizamshah of Ahmednagar. There are some famous temples in Kharmala.

The most important pilgrim spot of Kharmala is the beautiful Kamala Bavani Temple. The temple is dedicated to Kamala Devi, who is considered to be an incarnation of Tulja Bavani Mata (Tuljapur). This temple is one of the most historically acclaimed sites not only of Kharmala, but also of the entire Solapur district. 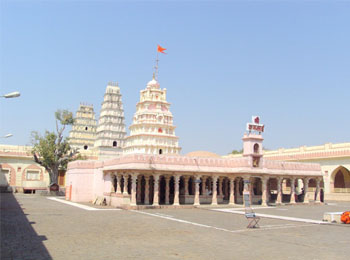 Rao Raje Nimbalkar built the Temple in 1727. The temple attracts numerous visitors with its unique and wonderful architecture. It is built in Hemandpathi style of architecture. The temple is surrounded by a wall and the fort has twenty one bastions with a distance of 115 feet between two bastions. The temple, which resides to the east of the town, is situated on a slightly raised plateau. The temple homes an artistic spire in front of the homakund and three lamp posts in the back of the homakund. A bird’s-eye-view of the surrounding area is possible from one of these lamp posts.

The temple has entrance doors in all three sides; in east, south and north direction. Among the gopuras, the one over the west gate is more impressive. One can see a bell in the sabhamandab of the temple, which is nearly 150 years old. There is an inscription over the bell, which mentions that it has been hung there since 1740. Idol of Mahadeo and Ganapathi is situated one side of the Goddess and the other side homes idols of Vishnu and Lakshmi.


The most important festivals are Navaratri and a fair from Kartik Poornima to Ganesh Chaturthi.


October to February is the most suitable season to visit here, as festivals are performed during this period.