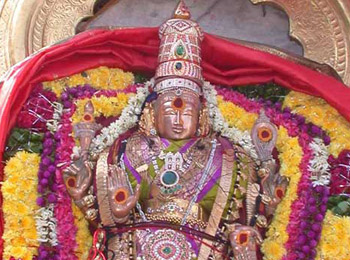 Kamakshi Amman Temple is a renowned shrine dedicated to Goddess Shakthi. It is located at Keelappalam in the town of Mannargudi. Sri Kamakshi Amman appears as a Swayambumurthy in this temple.

Since the Goddess is a swayambumurthy, as a due form of respect to the deity, the locals follow the practice of walking very softly on passing the temple, just like performing the ‘Adi Pradakshina’.

Worshippers, as a tradition, begin all auspicious ceremonies in their family with offering prayers to this Amman, a ritual popularly called the "Pachai Poduthal". This ritual starts with abisheka to the deity and performing poojas by chanting the Lalitha Sahasranamam. During the evening, the ceremony begins with the utsavamorthi of the Goddess dressed gracefully and is placed on a plank called Padi Chattam. Various items such as rice measuring six Marakkals, fruits , coconuts, vegetables, betel leaves and nuts are offered to the deity as nivedhyam.

The temple priest who acts as the representative of the Guardian Deity Kathavarayan, brings a wooden club named Sukkumandhadi (similar to the Gadha of Lord Anjeneya). Devotees offer fruits, flowers, neem leaves, green coconut, cigars, tobacco etc. This ritual is called the "Pallyam Poduthal." The priest then gives away the blessings called ‘Arul Vaku’ with the hand drum (Udukku) being played.

The devotee takes his family to the temple for performing the final ritual of tattooing. Worshippers strongly believe that offering prayers to Goddess Kamakshi ensures the hassle free conduct of ceremonies and thereby bring them happiness and good luck.

There was once a village in the east of Mannargudi known as Madhuvana Kshetra, which had Agasthya river to its north and Harichandra river to its south, named Kannipuri. This place at present is called Kunnipuri. Goddess Kamakshi graces here as "Seethala Parameswari."

Sri Maha Periaval of the holy Kanchi Mutt has given an elaborate explanation to the word Kamakshi. ‘Kama’ is a Sanskrit word which means Love and ‘Akshi’ means Eyes. Thus the word ‘Kamakshi’ gives the meaning ‘the Goddess with Loving Eyes – Graceful Eyes’. There is yet another meaning for the word Kamakshi which is derived from the words ‘Ka’ meaning Saraswathi who is the Goddess of Wisdom and‘Ma’ meaning Mahalakshmi, the Goddess of Wealth. Mother Kamakshi is said to have both Lakshmi and Saraswathi as her eyes.

The idol of Goddess Kamakshi is relatively small in size and has appeared as a swayambu about 200 years ago. The Devi appears in a sitting position with her right leg folded and the left hanging below. The temple was once said to be made of small palm or coconut leaf tent. Today it is one of the popular temples of the area. The temple stands unique from other temples since Goddess Kamakshi graces as a swayambumurthy in the temple.

The annual ‘Thee Midhi’ ceremony which is of prime importance in most Amman shrines, is performed by the devotees by walking on the holy fire pit. It is celebrated every year in the month of Chithirai (April-May). Devotees and Priests personify the Goddess in a pot of water, carry them and walk on the fire pit.

How to reach Kamakshi Amman Temple

The temple is located at a distance of hardly half a kilometer from the Chathirathadi bus stop, on the Mannargudi-Vikravandi town bus route. One other way of reaching this temple is by getting down the bus at the Kammakudi stop which is enroute Mannargudi and Tiruthuraipoondi and walking towards the temple for about a kilometer.

The nearest airport is located at Trichy which operates many flights in the domestic and few international routes.