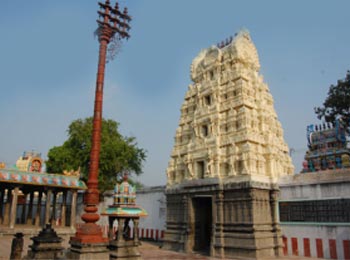 Along with the main deity of Goddess Kamakshi Amman, there are 64 other deities of Parivara Devadas enshrined in the temple.

As per a legend, a woman related to a priest of Nallinam Village lived at Avudayarkoli. This region of Avudayarkoil was known due to God Shiva who was gracing the place as Manickavasagar. He was one of the four special people on earth who knew the hymns of Thevaram and Tiruvasagam. One day the woman was driven out of her house along with her infant. On her way to her brother’s house, she went to Kalayarkoil and bought a deity of Goddess Kamakshi Amman. Along the way, some soothsayers helped her reach the house.

When the infant became 10 years old, he asked his mother for a toy called Udukku. The mother happily brought that toy for her son and he began playing music with it. The deity of Goddess Kamakshi listened to the music played by the child and was very happy due to it. She blessed both the mother and son with a boon that all their wishes would come true. The people living with them were surprised to see that all their wishes were coming true.

During that time, the wife of King Kalayarkoil became severely sick and no doctor was able to cure her. The King even put the soothsayers in the jail after their predictions failed. The little boy with the blessings of Goddess Kamakshi then went to the King and explained him the cause as well as cure of the disease. The boy even requested the King to set the soothsayers free as they once helped his mother. The King freed the soothsayers and thanked the boy. Soon afterwards, the four members of the boy’s family constructed this temple and dedicated it to Goddess Kamakshi. Since then Goddess is known as the boy’s Mother.

The festival of Mahashivarathri is celebrated with great joy at the temple. Special prayers are conducted on full moon days every month. The devotees offer milk pots as well as Kavadis to the God during festivals.

The Pudukottai Railway Station is nearest to the temple.

Frequent bus service is available from Chathiram Village to reach the temple in Pudukottai as it is only 18kms away.