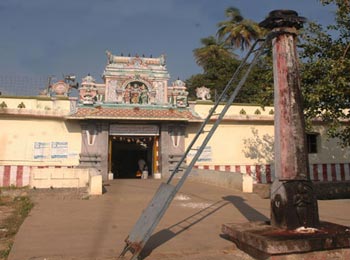 The deity of God Vishnu is worshipped at the holy Sri Kalyana Prasanna Venkataramanar Temple which is located at Mohanur in Namakkal, Tamil Nadu. The deities of Goddess Padmavathi thayar is enshrined in the temple along with the deity of God Kalyana Prasanna Venkatramanar. This temple is almost 500 years old. As per the legend, once a devotee of God Venkatramanar suffered from a paralytic attack and was not able to visit Tirumala during the Brahmorchavam. He was suffering as he was not able to walk and decided to commit suicide. He went to the Cauvery River to drown himself but was stopped by a snake. That night he saw God Venkatramanar in his dream and he was told that God Venkatramanar is living in an ant hill. The devotee went to the ant hill and dug out the God’s deity. Afterwards he consecrated this deity near the banks of river Cauvery.

The deity of God Perumal is enshrined in the temple below the Vedasrunga Vimana and a festival named ‘a day in Tirupathi’ is celebrated in the temple with great joy during a Sunday in the week of Navrathri. This festival is celebrated to thank God Tirupathi and several prayers are conducted during this day.
There is another deity of God Vishnu which depicts a Lakshmi Rekha on his chest rather than the image of Goddess Lakshmi. It is of great significance at the temple. A shrine is behind the sanctum is dedicated to God Danvanthiri while a shrine built on the roof is dedicated to God Navagrahas. The shrine for God Narasimha’s deity is also constructed opposite to the Goshta in the temple. Along the Goshta wall, there is a shrine dedicated to God Lakshmi Hayagriya and Goddess Medha. Thousands of devotees visit this temple each day as they believe that the Gods blessings have the power to cure all ailments. The devotees offer Nivedhana and Abishek to the Gods as a symbol of their respect.
During the Tiruvonam star day, special prayer of Sri Satyanarayana Puja is conducted in the temple. The devotees offer Mattai Thengai i.e. coconut without stripping to the Gods. These coconuts are then taken by them to keep in their house. On full moon days and every Thursday, special prayers are dedicated to God Lakshmi Hayagriya. The students present honey as abishek to Goddess Saraswathi wishing for her blessings in the academics.
The devotees take a bath in the sacred Cauvery River and worship at a shrine dedicated to Goddess Cauvery. On the Aadi Perukku day, special prayers are conducted in the temple.


The Puruttasi Saturdays are celebrated in the temple during the month of September or October. Special prayers are conducted on the star days of Tiruvonam.

The Salem Railway Station is nearest to the temple.

Frequent bus service is available from Mohanur to reach the temple as it is only 18kms away from Namakkal.

The temple is open every day of the week from 7am to 11am in the morning and from 5:30pm to 8pm in the evening.