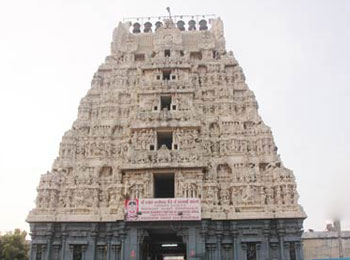 This Divyadesam is situated inside Sri Kamakshi Amman temple in Big Kanchipuram. It is placed on the right side of the Garbagraham of Ambaal (Moolavar sannadhi). In this Sthalam the Moolaver is Sri Aadhi Varaha Perumal.Ekadasi in December-January and Navarathri in September-October are the celebrations celebrated in the open from 6.00 a.m. to 12.30 p.m. also, from 4.00 p.m. to 8.30 pujas and curd rice nivedhana are recommended as petition to God duties. Mangalasasanam are Thiru Mangai Alwar - 1 Paasuram. Pushkarani is Nithiya Pushkarani. Vimanam is Vaamana Vimanam. 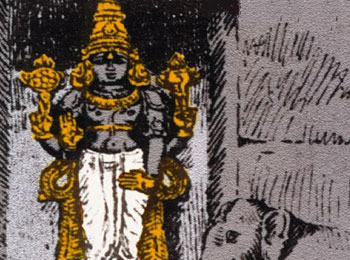 Here Lord Perumal shows up as Sri Deepa Prakasar, as the Moolavar in Nindra Thirukkolam confronting west heading. Thaayar here is named MaragathaValli. Thirumangai Alwar composed 2 pasurams. A major Vahana Mandapam is put in the temple.There is a separate sannadhi for Maragathavalli thayar. Also called Thoopul, it is the avathara sthalam of Sri Vedanta Desikar. There is a big sannadhi for Sri Vedanta Desikar in Gnana muthirai. Sri Desikar's life is depicted in pictures in the prakaram of the sannadhi. Sannadhis are: Deepaprakasar perumal, aragathavalli thayar, Andal, Lakshmi Hayagreevar, Desikar, Alwars and Acharyas. 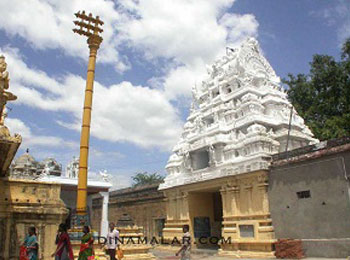 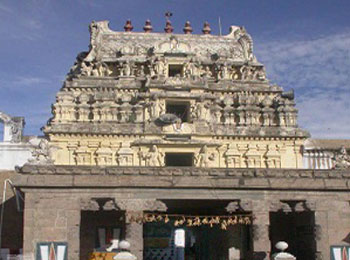 As Mother Kamakshi is incomparable and overwhelming in this locale, the nivedhnas and puja codes took after for Her, is followed in all sanctuaries. Abishek to Kalva Perumal is performed just with an oil called Sambiranai Thailam. As indicated by a story, Emperor Dasaratha revered Mother Kamakshi and Kalva Perumal before performing the yajna looking for Son Boon. It is additionally said that Lord Kalva Perumal exhorted Dasaratha to so. Sage Durvasa, however a Lord Shiva devotee had worshipped Lord Kalva Perumal. There is a mandap before the sanctum as the Gayatri Mandap in Mother Kamakshi altar furthermore one under this mandap with Mother Kamakshi, it is said. It is clarified that however the temple has a place with Kamakshi, She governs with due appreciation to Her senior Brother Kalva Perumal. Those entering this mandap need to sit and revere. Siblings are encouraged to worship Mother Kamakashi the sister and Lord Kalva Perumal the sibling at the same time for warm relationship. Vishnu and Mother Mahalakshmi were examining about the wrongdoings and great deeds of people and their illusions about material accomplishments. Over the span of the discussion, the subject turned on magnificence, identity and so on. Mother Mahalakshmi said that individuals get to be prosperous at Her exceptionally locate in light of the fact that She was reasonable in composition and went ahead to disturb Lord on the grounds that He was dull in shading. Master smilingly answered that genuine magnificence was in the psyche and not in outside looks which just took individuals to illusions. Mother did not subscribe to this hypothesis. Ruler said, "You can love excellence however it ought not do right by you. You have set more significance and adoration on your magnificence. You will get to be amorphous and your excellence won't be obvious." Mother did not expect this condemnation and looked for His exculpation and approach to help. Master Vishnu exhorted Her to perform atonement at a place that would bring a crorefold advantage for a solitary supplication to God. Mother Mahalakshmi came to Kancheepuram where Mother Parvathi excessively performed retribution on Lord Ekambareswara. Mahalaskhmi recovered Her unique structure. Because of her exceptional repentance, She turned out to be superlatively delightful that drew Lord Vishnu Himself. He saw Her covering up without Her insight and consequently called Kalva (stowing away like a criminal) Perumal. The other story is that Lord Vishnu was listening to a discussion Mothers Kamakshi and Mahalakshmi had on the banks Pancha Theertha from behind covering up. Subsequently, the name came "Kalva".


Presiding deity graces in a standing form. Mother Mahalakshmi appears in worshipping form. The vimana-tower above the sanctum sanctorum is of Vamana design. It is the faith of the devotees that worshipping Lord Vishnu and Mother Mahalakshmi together would bring them prosperity and growth in professions. The 40 feet long idol of Lord Athi Varadaraja Perumal in reclining posture is made of Athi wood. This is brought out once in 40 years for the darshan of devotees. Chakkarathazwar shrine – the deity of the discus of Lord Perumal – with 16 hands holding conch and discus is on the eastern side of the temple tank. He is also praised as Sudharsana Azhwar.


Vaikunta Ekadasi in December-January and Navarathri in September-October are the festivals celebrated in the temple.


It is the faith of the devotees that worshipping Lord Vishnu and Mother Mahalakshmi together would bring them prosperity and growth in professions. Special pujas and curd rice nivedhana are suggested as prayer commitments.


The closest airport is in Chennai.


The closest railway station is in Kancheepuram


Mother Kamakshi Amman Temple is in heart of Kancheepuram town.