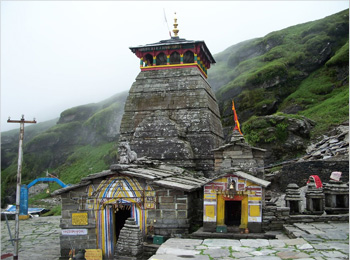 Kalpeshwar is a Hindu temple dedicated to Lord Shiva located at an elevation of 2,200 m (7,217.8 ft) in the picturesque Urgam valley in the Garhwal region of Uttarakhand state in India. 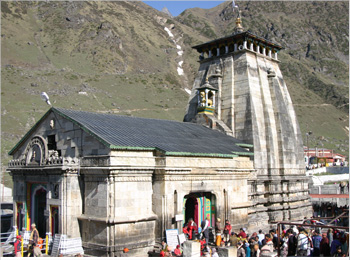 The temple's ancient legend linked to the Pandavas, heroes of epic Mahabharata eminence is the fifth temple of the Panch Kedars (five temples) of Shiva's five anatomical divine forms, the other four temples in the order of their worship are Kedarnath, Rudranath, Tungnath and Madhyamaheshwar temples, all in the Kedar Khand region of the Garhwal Himalayas. Kalpeshwar is the only Panch Kedar temple accessible throughout the year. 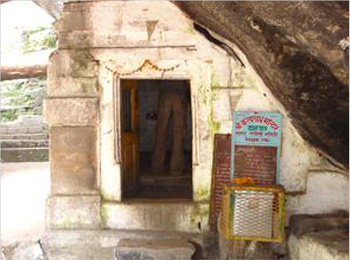 At this small stone temple, approached through a cave passage, the matted tress (jata) of Lord Shiva is worshipped. Hence, Lord Shiva is also called as Jatadhar or Jateshwar. It is approachable only by 12 km (7.5 mi) trekking from the nearest road head of Helong on the Rishikesh-Badrinath road. 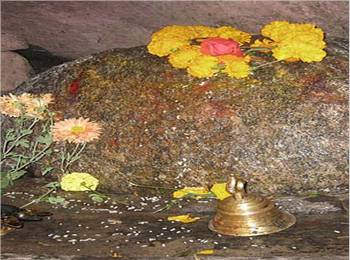 The epic legend narrated on the creation of the Panch Kedar temples is that Pandavas of Mahabharata epic history, while chasing Lord Shiva to seek his pardon for the fratricidal sins committed by them during the Kurukshetra war, realized that Shiva, in order to distance himself from the Pandavas, took the incognito form of a bull. But when this form of Shiva was discerned by Bhima, the second of the Pandava brothers, tried to hold on to the bull's tail and hind legs. But the bull vanished underground at Guptakashi. Subsequently it reappeared in five different forms: His hump appeared at Kedarnath, his bahu (arm) was spotted at Tungnath, his head surfaced at Rudranath, the stomach and navel were traced at Madhyamaheswar and his jata (tress) was divined at Kalpeshwar. Another legend states that this place was much preferred by sages of folklore for meditation. Particular mention is made of sage Arghya who through his austere penance created Urvashi, the famous apsara (nymph) at this place. Durvasa, an ancient sage, son of Atri and Anasuya, considered an incarnation of Shiva, known for his short temper did penance and meditated under the Kalpavriksha, the wish fulfilling divine tree in the precincts of the temple. Further, it is said that Durvasa had given Kunti, mother of Pandavas, a boon that "she could invoke any of the forces of nature and they would appear before her and grant whatever she desired". Once, when Pandavas, were in exile here, in order to test them Durvasa visited them along with his disciples and desired to be dined by them. Unfortunately, there was no food available within the house to feed the surprise guests. Draupadi, wife of Pandavas, sought Lord Krishna's help. Krishna materialised on the scene and solved the problem.

The temple priests at this temple also are the Dasnamis and Gossains, disciples of Adi Shankara. At Tungnath also the priests are Khasiya Brahmins. These priests hail from South India, the Namboodiri brahmin sect who worship at Badrinath and Kedarnath from Kerala, the Jangamas are lingayats from Mysore and the Dasnami Gossains belong to Adi Shankaras group. The priests at the Rudranath temple are Dasnamis and Gosains.

The nearest airport is Jolly Grant Airport in Dehradun, which is about 285 km from Kalpeshwar.

The nearest railhead is at Haridwar which is about 280 km away from Kalpeshwar. Trains are available from Haridwar to other major cities in India.