Kalmadhava Peeth is among the 52 Shakti Peethas of Devi Sati. It is said that, the left buttock of Goddess Sati fell here, when Lord Vishnu in order to relieve Lord Shiva from grief of losing his wife Sati, used his ‘Sudarshan Chakra’ to cut Goddess Sati’s body. Then, at the place where the left buttock fell, this temple was constructed. Kalmadhava Shakti Peeth is situated in Amarkantak, Madhya Pradesh. Here the idol of Devi Sati is called as ‘Kalmadhava’ and the Lord Shiva is worshipped as ‘Asitananda’. 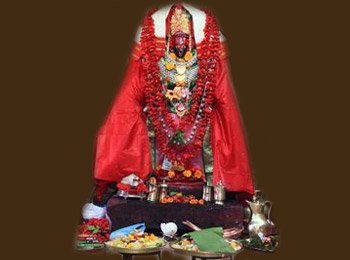 The art and architecture of Kalmadhava Shakti Peeth is very heartwarming. The temple is made of white stones with ponds all around it makes it an interesting view. Adding to the charm is the picturesque view of Son River and the nearby kund. These sightseeing spots cannot be missed while visiting the temple. The significance of the place manifolds with two major hill ranges merging with one another - Vindhya and Satpura. There are around 100 steps to be climbed on the way to reach the temple. Narmada River's beautiful view is another mesmerising sight visitors shouldn't miss. Kalmadhava Shakthi Peeth is also called as Sonakshi Shaktipeeth Temple of Devi / Aadi Shakti in the form of Durga .

The presiding Deity here is Devi Sati called as ‘Kalmadhava’ and Lord Shiva worshipped as ‘Asitananda’. 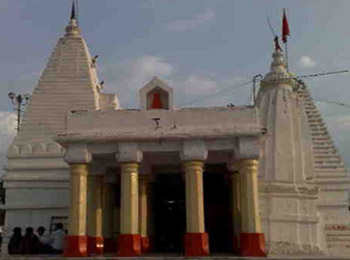 Amarkantak is said to be founded about 6,000 years ago by the Suryavanshi Samrat Mandhata. History of this place dates back to the time when it is said that the left buttock of Devi Sati fell in this place. Best information about the origin and the formation of this temple can can be had from local people. Religious books, Purans etc are worth trying to find out the history about the Shakti Peeth.

Sharad Purnima, Makar Sankranti, Ram Navami ,Deepawali and Somvati Amavasya, are some of the important festivals celebrated here. Navratri that falls two times in a year- one in the month of March or April and other in the September or October month depending on the Hindu calendar, is among the major festivals here. Navratri are celebrated over 9 days, with some people not eating any type of food that is derived from the soil for these nine days. Special ceremonies and rituals are carried out during these days. People (Almost every day) offer their offering to the god in form of fruit, milk, homemade sweets etc. Another festival that is celebrated with great fervour is the ‘Shivaratri’ and during this day, people keep fast, pour milk on the Shiv Lingam and offers ‘Bail’ (A type of fruit) to the god idol.

You can get both economic and expensive types of accommodation here. List of some of the hotels that will help you to short your search for finding accommodations - Hotel Shree Mata Sadan, Sarvodaya Vishram Griha, Ashish Palace Holiday Home, Sri Ramakrishna Kutir, Sal Valley Resort Hotel are some of the economical type, decent accommodations. Here the rent of each room may vary from Rs 500 to Rs 1700. Also there are several free of charge guest houses or dharmsalas that are run by the various nonprofit organizations. Beware of the touts who promises to give hi-fi deals with cheap rates.

Nearest airport is the Jabalpur and Raipur where domestic flights are available. For international flights, Delhi and Kolkata airport are the nearest. 1. Rickshaw, Auto Rickshaw and Bus are common mode of transport in the city. 2. Try to make your trip in the month of January as the weather during that time of the month is quite good.

Direct trains are available to Pendra station and various trains directly from Patna to here. But no major train directly from the major cities of India.