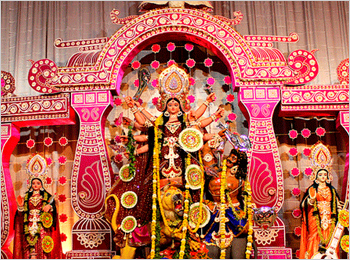 The New Delhi Kali Bari is dedicated to Goddess Kali and the center for Bengali culture in New Delhi, India. Established in 1930s, it is situated on Mandir Marg, close to Laxminarayan Temple (Birla Mandir) in Delhi. 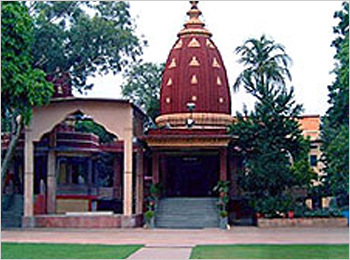 After several years of demands by the burgeoning expatriate Bengali population, one acre of land was allotted on the new Mandir Marg (temple road), next to the Laxminarayan Temple. The small unpretentious temple of Goddess Kali came up shortly thereafter, with a pratima (idol) resembling the one at Kalighat Kali Temple in Kolkata. The mandir committee was formalized in 1935 with Subhas Chandra Bose as the first president and the first Mandir Building was inaugurated by Sir Manmatha Nath Mukherjee. The temple is rather small and very simple in design. From within the temple grows a huge 'peepul' tree that pierces through the ceiling to shade the temple. Hindus consider the peepul sacred and red threads are tied around its bark when beseeching a boon.

This temple is dedicated to Goddess Kali.


It is the centre of celebration during the festival of Durga Puja held every October. Since, Kali is believed to be the manifestation of Durga in her most terrifying, warlike avatar, liquor is offered to the goddess in this temple. 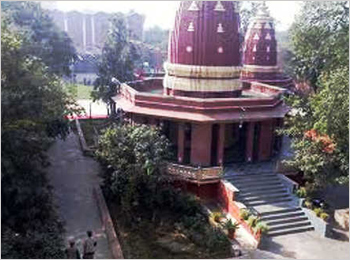 The Durga puja celebrated at the Kalibari, is one of the oldest Durga Pujas in the city. It first started in 1925. The original temple of Kali Bari was situated on Baird Road (today's Bangla Sahib Road), where the local Bengali community gathered for the annual Durga Puja. After the present temple came up after 1931, it shifted here. The puja celebration at Kali Bari continued to follow the traditional style, with traditional ekchalar thakur (single frame for idols) and sholar kaaj. Even puja rituals have remained unchanged since 1936 and traditional competitions in Rabindra sangeet and recitation are still organised. Mr Swapan Kumar Chakraborty is the current President of Delhi Kalibari. Artisans are brought in from Kolkata to build the puja pandal. 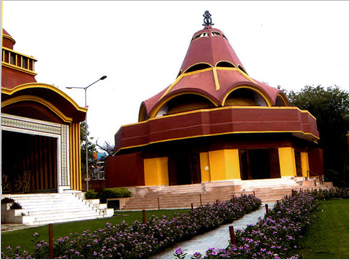 Dakshin Delhi Kalibari has constructed a Dharamshala for devotees who can stay for a short period. The foundation stone of the construction of Dharamshala was laid by Shri Pranab Mukherjee, Honorable Finance Minister of India on 10th August 2007 and Inaugurated on 15th April 2010. The Dharamshala has 41 rooms consist of 99 beds with attached bath, suitable amenities for the stay. Dharamshala is supported by Canteen which served quality food and snacks in breakfast, lunch and dinner. The booking facility is available for all people, depends on availability of accommodation.

The temple is located on the Mandir Marg, situated west of Connaught Place in New Delhi. The temple is easily accessible from the city by local buses, taxis and auto-rickshaws. Nearest Delhi Metro station is R. K. Ashram Marg, located about 2 km away.