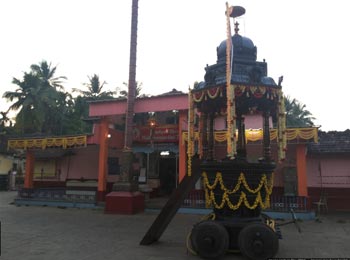 Located in Udupi (Karnataka) the Kadiyali Mahishamardini Temple dedicated to goddess Durga. The 12 centuries old temple is noted for its unique Idol.

Devotees from all over the world worship Shakti 'Power' in this temple. The name of the temple originates from the Kadiyali district in south Kanara. In Karnataka the goddess Durga is worshipped as the power goddess or as Goddess Shakti. An ancient (10th century) unique method of architecture which is common in Kerala is that the temples are made of medium sized stones with slanting roofs.

The two feet tall statue in the temple is the agitated form of Goddess Durga known as 'Mahishamardini'. She acquired this form after killing 'Mahisasur' (by slitting his throat) who was an evil spirit and had troubled the lives of the Gods. The statue is considered to be found in the 6th century A.D.; the unique embellishment of stones adds to the age of the statue. The Lotus, lion skin clothes are few features of the statue which date back to the 8th century.

The statue is standing with the Prayaga Chakra (the discus) in her upper right hand, the Shankha in her upper left hand (Conch), the helpless demon at her feet whose head is pierced by the Trishul (Trident) in her lower right hand and whose tail she is pulling with her lower left hand. The demon's abdomen is bulging due to the pressure exerted by her on his tail. The Goddess's facial expression and the casual way of her holding the weapons shows that it is but a child’s play for her to finish evil.

As narrated by the legend the now temple was long ago covered by dense forest and there was small water tank which was often visited by the Gnadharvas and the saints. A young man while carrying the idol to a distant land, rested there and placed the idol nearby. Later when he tried picking up the idol to continue his journey the statue would not move. After a lot of efforts when the Murti did still not move a group of sages led by Kanava Rishi reached there and realized the presence of the Goddess. Hence the Murti was consecrated by Lord Kanava. The small tank is now a well and lies in the premises of the temple.

How to Reach Kadiyali Mahishamardini Temple

The nearest Airport is the Mangalore International Airport located at a distance of 40 Kms from the temple. The airport operates both at national and the international levels.

The Udupi railway station located at a distance of about 1 Km from the temple facilitates trains to every major city in India.

The temple is located on the state highway SH25A Udupi- Karkala. The excellent bus service to the temple makes it easier to reach the Temple.