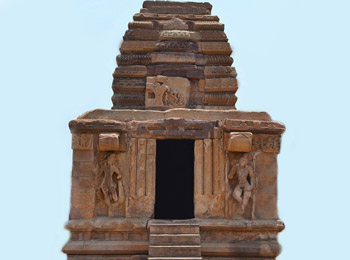 Kadasiddeshwar Temple situated inside the Pattadakal temple complex is a beautiful temple constructed in the middle of 7th century. This temple is dedicated to Lord Shiva and is situated very close to the Jambulinga Temple at a distance of 300 meters from Pattadakal Bus Stand.

This modest temple shows an experimental stage in the development of temple architecture, particularly in the axial expansion of the plan and superstructure. Facing the east, this temple has on plan a square sanctum (garbhagriha) housing a linga on the pitha, an astylar, rectangular mandapa and probably a mukha-mandapa as suggested by the plinth and the brackets above the dwarapalas flanking the mandapa doorway decorated with five bands (sakha), which are now worn out.

The temple is built on a raised plinth with the usual five mouldings. The wall surfaces are plain but for a frieze of ganas carrying garlands at the top. The superstructure is the rekha-Nagar (northern) type having a curvilinear profile with a rudimentary sukanasa projection on the east. The sukanasa depicts dancing Siva and Parvathi in a shallow trefoil chaitya-arch. The niches on the outer walls of the sanctum (garbhagriha) house the images of Ardhanariswara (north), Harihara (west) and Siva (south). The doorway of the sanctum has pilasters set among decorated bands (sakhas) with Siva and Parvathi seated at the centre of the lintel and Brahma and Vishnu on either side. River goddesses and attendants are carved at either side below the bands.

How to Reach Pattadakal

The Bengaluru Airport is the nearest, at a distance of about 449 km. From Bengaluru one can get taxis, cabs or bus to reach Pattadakal.

The nearest railhead is Badami, at a distance of about 20 km. Autos can be availed easily from Badami to Pattadakal. Badami has connectivity with Mysore, Bijapur and other locations of Karnataka by train.

Pattadakal is linked with Badami by the State Highway 14. Aihole is about 10 km from Pattadakal and has connectivity with other major locations by road.