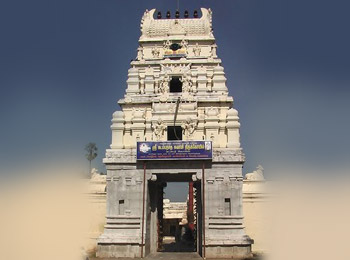 The name of the presiding Deity of this temple is ‘Kadambanathar’. It is situated in the village of Kadambar Koil about 15 Kilometres away from Kanchipuram (Kancheepuram), on the road to Uthiramerur (from Kanchi) . The God in this temple is known by the holy name ‘Kadambanathar’. The very fact that this holy place is located on the western banks of the river Cheyyar that flows in the north-south direction bears proof to the sacredness of this place.

Lord Kadambanathar is seen gracing from a shrine in the northeast corner of the temple facilitating Lord Muruga to worship him. The Vel, weapon of Lord Muruga in its idol form is open for the darshan of devotees in a shrine also located in the northwest corner. The temple entrance welcomes the devotees with a five tier Rajagopuram. The Oonjal Mandapam and the Vasanth Mandapam in the outer prakara are on the left sides respectively. The Bali peeta and the flag post-kodimaram are in between them. The elephant gifted by Indira to Muruga is also in found there. The entrance to the inner mandapam is adorned with beautiful portrayal of the wedding of Lord Muruga. The inner wall of the Darshan mandapam in front of the sanctum sanctorum is enclosed with brass sheets portrayed with Siddhas etched on them. The western wall is decorated with paintings of Lord Muruga fighting with Malayan Magaran.

Lord Muruga, addressed as Balasubramania appears grandly in standing posture in the sanctum sanctorum with His Vel and Cock symbol flag while the vahan peacock is at his feet. The idol is 6 feet in height. The shrine of mother Gaja Valli – amalgamation of Valli and Deivanai - is seen on the left side. This is an exceptional feature of this temple. It is said that Lord Muruga placed his Vel in this place to guard Sage Kashyapa while in penance. Till date, no one has been able to guess the depth of the Vel. In the place of Chandikeswara as commonly in Shiva temples, Sumithirai Chandikeswara shrine adores this temple.

When a Pandya Brahmin called Gunaseelan was dead, as per his wish, his son Budhisenan was on his way to Kasi to immerse the ash. While doing his nitya karma (Sandhyandhanam) keeping the pot with ash in the bank, he experienced the smell of flowers from the pot. He was astonished to find that the bones had changed to flowers in the pot. At the same time, a sacred voice mentioned that this place is much sacred than Kasi and so let the ashes be immersed here. He obeyed the instructions as heard and did the same in the river Cheyyar here so as to fulfill his father’s wish. So this is a place where one can do the rituals for the forefathers like in Kasi and to worship for salvation.

Uma Devi wanted to be with Shiva permanently and Shiva asked her to worship him at Kadambar koil to get her wish fulfilled. Uma Devi left Kailasam and worshipped Shiva at Thirukedharam, Kasi, Tiruvengadam, Kaalahasthi, Thiruvalangadu, and Kanchi and then came here to become a permanent part of Shiva.

The annual temple festival is celebrated during the Mahashivarathiri.

How To Reach Kadambanathar Temple

In the Uthiramerur-Kanchipuram main road, at Vengacheri which is about 10 kms from Uthiramerur, we have to turn left (west) and go further for about a km. The temple is on the southern bank of Cheyyar.