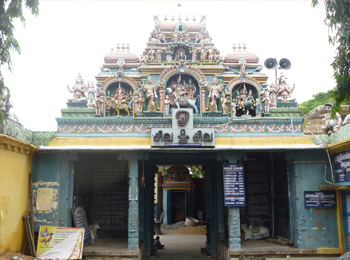 Kachaleeswarar Temple is located in the Armenian Street of George Town locality of Chennai, Tamil Nadu. George town is the original British settlement which was called the Madras in the olden times. Kachaleeswarar or Kachabeswarar means ‘the Lord who was worshipped by a tortoise’. The second incarnation among the Dasavataram or ten incarnations of Lord Vishnu was the form of the tortoise called Koorma Avataram. This incarnation of Vishnu was worshipped by Lord Shiva and thus he earned the name, Kachabeswarar (Kacha: tortoise).

The Shivalinga at the Kachaleeswarar Temple is own of its kind. Lord Shiva usually appears in the lingam form in most temples while the Lord Shiva at this Kachabaleshwar temple is portrayed with five faces as Sadasivamoorthy. He graces here along with his divine Devi Manonmani.

A tortoise is found at the foot of the Shivalinga which signifies the Koorma Avathar of Lord Vishnu. There is a separate shrine for the Ambal (goddess) here who is known by the name Soundarambikai (Azhakambigai). Goddesses Lakshmi and Saraswathi are seen gracing from either sides of the Ambal Sanctum. Offering prayers to all the three Devi here is believed to bless a person with knowledge, personal and financial growth.

A five-faced ‘Herambha Vinayagar’ is seen sitting on his Simha vehicle (lion and not mouse) in a shrine opposite to the main Sanctum. He graces here along with his consorts Siddhi and Buddhi Devi. Worshipping this deity here is said to bestow married couples with better unity and understanding. This precinct also houses the idol’s of the much revered saints, the 63 Nayanmars. Separate shrines for deities like Dattatreyar, Durga, Aadi Sankarar and Moolakeswarar are also present in this temple. Lord Shanmuga (Muruga) is seen here along with his consorts. The idols of the famous Shivite saints the Nalvar, Lord Nataraja with Sivakami are also housed here.

There is a separate shrine for the Navagrahas (nine planets) with the Sun God Surya Bhagvan at the center. He is the only Navagraha to be sighted with his wives, Usha and Ptratyusha.

The larger prakaram (Corridor) of Sri Kachaleeswarar Temple encompasses the shrines of Sri Adi Shankarar, Lord Anjaneya, and Lord Ayyappa. When the sanctum of Lord Ayyappan in Sabarimala caught fire, a new image of the deity had to be carved and was taken from Tamil Nadu. This image was brought to the Kachaleshwar temple for pooja before being taken to Sabarimala. When they were about to take the deity out of this temple, some reason or the other are said to have aroused, delaying its departure. Thus the Ayyappa Swamy meant for Sabarimalai had to stay in this Kachaleeswarar Temple at Chennai for about three days. Ritualistic ceremonies were performed on the Lord during his stay here. A separate sanctum was also built here for Lord Ayyappan in memory of the above event. The Makara Jyothi festival of Ayyappa is performed at the same time as in the original Sabarimala Sastha temple.

An ardent Shiva devotee was once returning back frm Kancheepuram after offering prayers to Lord Shiva, gracing there as Lord Kachaleshwarar. On his way back, it started to rain heavily thus flooding the river Paalar. The anxious devotee was praying the Lord for his safe return back to his place since he had a lot of unfinished works. The rain persisted for about week but it took another week go the flood water to recede. He became anxious as he had to return home to look after some important business. The devotee had utmost faith on the Lord and prayed to him fervently. When the water finally receded, the devotee at last returned home. To his surprise, all his unfinished works were completed satisfactorily. It was believed that Lord Shiva had assumed the devotee’s persona and had finished all the works. The devotee performed the Sivalinga pooja is said to have built a temple for Kachabeswarar in Chennai as a mark of gratitude to the benevolent Lord. After eight years of hard work, the construction of the temple was at last completed in the year 1720 CE. As Tim passed, re name of the Lord got colloquially changed to Kachaleeswarar.

When the Milky ocean was churned by the devas and asuras (gods and demons) together seeking the divine Amritha, they used the Mandara Mountain that was used as the churning rod and the Vaski snake as a rope. During the churning process, the mountain suddenly submerged into the ocean. In order to enable further churning, Lord Vishnu took the form of a tortoise (Koorma) to support the Mandara Mountain. Lord Siva is believed to have worshipped Lord Vishnu and was hence called Kaacchabeswarar or Kacchaleeswarar.

Those facing troubles in getting married is said to get relieved from all marriage related hindrances on worshipping the deity here. They perform the sacred ‘Rudrabhishekam’ to the Lord her which is believed to eradicate the hurdles in one’s marriage. The Ambal here is said to bestow her devotees with child boon.

Devotees bothered by Naga dhosha and those scared of poisonous creatures perform the holy abhishekam to Lord Kachaleeswarar. Lord Sadasivamurthy is present on the wall behind the main sanctum. People widely believe that worshipping Lord Sadhasivamoorhy along with the formless Linga in the same sanctum will wash away one’s sins fandrom the current and previous births. It also is considered to provide salvation from this material world. Those affected by various planetary afflictions also visit this temple at George Town seeking relief. Few people also celebrate their Sashyapthaboorthi (sixtieth birthday) in Fremont of the Navagrahas praying for their well being and prosperity.

How To Reach Kachaleeswarar Temple , Chennai

The Chennai International Airport is located about 20 Kms from George Town and is the nearest Airport the area.

The closest Railway station is the Chennai Central Railway Station which is located about 2.8 Kms from this place.

Sri Kachaleeswarar temple is located in the Armenian Street of the George Town locality. The area is in close proximity to the busy Parrys Corner in Chennai. The temple is hardly 5 minutes walk from the Chennai Central station.