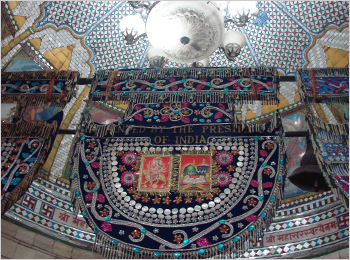 The oldest Hindu temple situated in the small village of Mehroli is the ancient Yogmay Temple. Yogmay temple is also known as the Jogmay temple which is dedicated to Goddess Yogmay, sister of Lord Krishna. It is located in New Delhi near the Qutub Complex. This shrine is believed to be one of the five surviving temples from the Mahabharata time in the city. Mehroli was the first capital of post-Rajput era. This is one of the five temples dedicated to Yogmay, other 4 being in at Barmer, Jodhpur, Vrindavan and Multan.

The main god of this temple is Goddess Yogmay is called as the “Pure Goddess”. The idol is made of black stone and was placed in a well, made of marble. The sanctum of Goddess Yogmay is topped with a Vimanam which is 42 feet and dome. Two small fans of the same material are seen suspended from the roof. The temple complex is 400 ft (121.9 m) square, with towers at the four corners. There is a table in front of the idol in the sanctum floor where the devotees offer their offerings. In this temple, the Shiva lingam is placed slightly above the level at which the Goddess is placed. As the Goddess is Shakti and Shiva is always above Shakti.

Lord Krishna, the eighth son of Vasudeva and Devaki, was replaced by a baby girl. She was born at the same time to Nandha and Yashoda in the village of Gokula across the Yamuna. Vasudeva had exchanged the babies at the very night they were born. In the morning, the guards told Kansa that a baby was born in the night. On hearing this, Kansa went to the prison to kill the infant. But the child slipped out of the hands of Kansa.

The baby girl was goddess Yogmay, according to Shwetashvatar Upnishad. As Lord Shiva is nothing without Shakti, so was Lord Krishna without Yogmay.

According to history, Yogmay Temple was built by the Pandavas, at the end of Mahabharata. Mehroli place is also named as Yoginipura. Mehroli is one of the seven ancient cities that make up Delhi. It is also believed that Krishna and Arjuna came to pray here during the Mahabharata war after Abhimanyu was killed by Jayadratha. Arjuna took a vow that he would kill him by next evening. Arjuna and Krishna came to pray for the blessing from the Goddess. With her magical powers, she created an illusionary eclipse that gave Arjuna the opportunity to kill Jayadratha.

This temple had been built in early 19th century and is regarded as an aspect of Maya, the illusionary power of God. The temple is located within the Lal Kot walls constructed by the Gurjar Tanwar chief Anangpal I around AD 731. It was later expanded by Anang Pal II in the 11th century.

This temple was destroyed by Mohammed of Ghazni who was the most prominent ruler of the Ghaznavid Empire in the beginning and later it was once again destroyed by Mamluks. The temple was renovated by the Rajput king, Hemu. The present structure of the temple was built in the early 19th century.

Roads are well maintained here, so one can easily ride through cabs or can travel through their own vehicle.