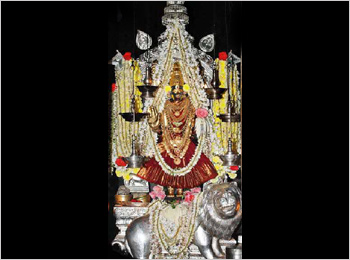 Sri Jayadurga Parameshwari temple is a Goddess Vanadurga temple located at Kanarpady, Udupi district of Karnataka. It is a square-formed altar, built with strong stones. The statue of God is around 3 feet high and is more alluring owing to the immense Prabhavali (aureole) wrapping the whole icon from back. The name "Kannarpady" came into practice after a Brahmin family, known as 'Kannara', lived in the town. 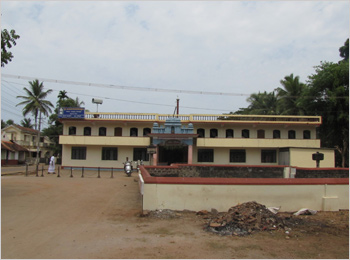 The temple is located to the Northeast of Udyavara Fort. There is ‘theerthamantapa’ on the inner corridor of the temple. The Sanctum Santorum was constructed with ‘chaturrasa’ a variety of back granites of middle age. On either sides of the door, idols of Lord Mahaganapathi and Lord Subramanya were installed recently. In the surroundings of the temple are installed Nandikeshwara on the southern side, Raktheshwari, Nagadevaru and Brahmastaana on the Western side and Kallukuttiga and Kshetrapaala on the Eastern side. On the Eastern portion there is ‘ Kanwa Pushkarani’.

Once when His Holiness Shree Vadiraja Swamiji of Shree Sode Mutt visited the temple, pooja was being performed. The Swamiji who was so thrilled, spontaneously composed a devotional song in praise of Mother Jayadurga, whish is now popular as “ Shree Durgaasthava”.

Devotees’ giving jasmine flowers and silk sarees to the Goddess as their offerings is a Custom here. During the tenture of former management committee, many developmental activities including construction of ‘ Jayadurga Kala Bhavan ‘ Auditorium, Swagatha gopuram etc.,have taken place.

At present, the surrounding wall of the temple (‘powli’) is in dilapidated condition and needs urgent renovation. It is decided to construct a new Dining hall ('Daasoha Bhavan'), a well equipped pantry (kitchen), a theerthamantapa, a new ‘ swagata gopuram’,silver covering to the flag post (dhwaja stambha) and to perform ‘brahmakalashothsava’. A renovation committee has been formed for this purpose with the help of villagers and devotees of the temple. As per the wishes of the devotees, a mass prayer was performed and ‘mushtikaanike’ was offered to Mother Jayadurga. 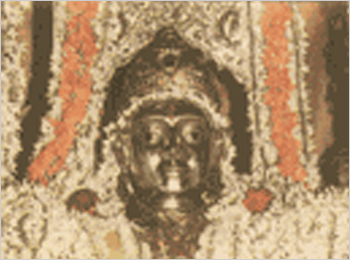 The murti of Goddess Jaya Durga is two-armed and she is in a benign form. Her hands are in blessing posture. Her Vahana, lion, can be seen in front of the murti. The sacred pond in the temple premises is known as Kanva Pushkarani. The shrine is believed to be more than 5000 years old. The temple architecture is quite similar to other coastal Karnataka Temples. The sanctum sanctorum is constructed using black granite. The flooring of the sanctum is constructed using 2 pieces of lithostone. It absorbs water. In the inner premises of the temple there is a Teertha Mandapa. The important subsidiary deities worshipped in the temple are Ganesha, Subrahmanya, and Shasta.

Since there are no any scripts or records to record the history of the temple, its existence is believed to be well back to many ages. According to historians, the now called Udyavara was known as Udayapura then. Researches show that this was ruled by then kings of Alupa Dynasty. Hence it is belived that the Shree Jayadurgaparameshwari Temple was administered by these Kings. As per the Mythological history, in the ancient days there lived a sage Kanva near the small lake in front of the temple performing pooja rituals. One early morning Shree Devi appeared in his dream saying that she was Jayadurge and was willing to be served by him. When sage woke up in the morning he found an idol resembling the face of Shree Devi who had appeared in his dream last night. Sage felt too happy. Thus the place where the sage performed his rituals came to be known as Kannarapady and the lake as Kanva Pushkarini. The place surrounding the Ajjarakd was then a very dense forest. The verge of the forest was this place which was called as Kadekadu, which then came to be known as Kadekaru.

Once upon a time, this temple was administered by the Brahmin family. This community was referred as Kanvaraaya, Kannaraaya, etc. Shankar Kanvaraaya belonging to this community had offered a bali murthy of Devi in remembrance of the yatra by his wife. This can be found from the inscriptions found at the temple. Historians believe that this inscription date back to 16-17 century. According to the elderly persons, there was a split between the families who administered the temple. As a result the split away group took the bali murthy of the temple along with them to a ait near to Kalyanpura and installed the same. Thus this ait is known as Kannara Kuduru even now. The nearby people worship even now. Also in one more instance it is believed that a one more bali murthy taken from this temple is worshipped at Badanidiyoor village,.

In inner premises of the temple, there is a Teertha mantap in Qudrilateral shape. Garbhagraha of the temple is constructed using black granite. The speciality of the garbhagaudi is that the flooring is constructed using 2 pieces of lithostone on which the idol of the devi is placed. The stone used for flooring is so delicacy that even a drop of water drains easliy when spilled over the floor. Festivals

Important pujas in a day are

The most important festival observed here is the 9-day Navratri festival. The third day after Akshya Tritiya is when the annual temple festival is annually observed.