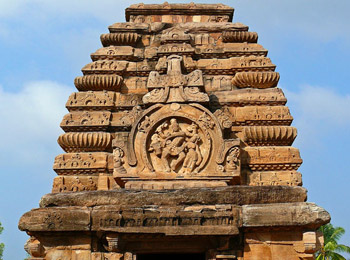 At a distance of 300 meters from Pattadakal Bus Stand, Jambulinga Temple situated behind the Galaganatha temple inside the Pattadakal temple complex is a beautiful temple constructed in the middle of 7th century. The temple houses the image of Lord Shiva, Goddess Parvathi along with Nandi. Jambulinga Temple has a horseshoe-shaped projection in its exteriors.

This temple represents a stage of experimentation in introducing a sukanasa projecting from the shikhara (over the mandapa) in front. Facing the east, this structure consists on plan a square sanctum (garbhagriha) housing a linga on the pitha with pranala on the north and a mandapa. To the east of the temple are seen the ruins of a raised platform and basement of a Nandi-mandapa on it. The couchant image of Nandi on this basement is worn out.

The temple is built on a high plinth having five mouldings with its topmost moulding (kapota) decorated with kudus, miniature ganas and birds. The walls are decorated with pilasters at the corners and on either side of the windows and niches. Walls of the sanctum have centrally projected ornate devakoshtha (niches) having sculptures of Siva (south), Surya (west) and Vishnu (north). The ends of the roof slabs of the mandapa and the ceiling slabs of the garbhagriha resting upon the cave are carved with vyalas and makaras and a frieze of swans runs below the cornice all round.

The superstructure over the sanctum is of the rekha-nagara (northern) style with a curvilinear profile rising in three diminishing stages, but its amalaka and kalasa are missing. A small sukanasa projecting from the shikhara (over the mandapa) is seen in the form of a trefoil chaitya-arch depicting Natesa with Parvathi and Nandi flanked by nagas in anjali posture.

The doorway of the mandapa is adorned with three sakhas (decorative door-bands). The stambha-sakhas on either side have purna kumbhas below their capitals and there is a frieze of swans over the door. The sanctum doorway has four sakhas with dwarfs and attendants carved beneath. The stambha-sakhas (pilasters) support a flat cave and a pediment above consisting of kutas and salas.

How to Reach Pattadakal

The Bengaluru Airport is the nearest, at a distance of about 449 km. From Bengaluru one can get taxis, cabs or bus to reach Pattadakal.

The nearest railhead is Badami, at a distance of about 20 km. Autos can be availed easily from Badami to Pattadakal. Badami has connectivity with Mysore, Bijapur and other locations of Karnataka by train.

Pattadakal is linked with Badami by the State Highway 14. Aihole is about 10 km from Pattadakal and has connectivity with other major locations by road.