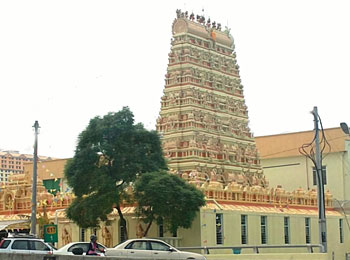 The temple was established in the 1870s by a group of Indian immigrants working with the East India Company. The temple was known as Sri Muniandy Temple when it was started. Later the name of the temple was changed to Sri Muniswarar Temple. Initially the temple was only a small attap hut, no cement floor and other facilities, such as piped water and electricity. The temple became famous among the Hindu devotees in Malaysia, Singapore, Indonesia, Thailand, Myanmar, Bangladesh, Cambodia, Japan and India as well as Hindu devotees residing in Australia, Britain, Canada and US. The temple is patronised by many nationalities and religions especially the Hindus, Buddhists, Christians, Sikhs and others. Many Chinese devotees too patronise this temple. The deities at the temple are well known for protection, justice, truth and benevolence. The deities at the Main Altar are Lord Sri Muniswarar Sri Ganesha and Lord Muruga. In front of the Main Altar stands Lord Muniandy majestically with an "Arwaal" (Sword) in one hand. There two white horses beside him, one on the right and another on the left. There is also a dog. It is believed that he used to roam the areas at night after midnight on his white horse with an "Aravaal" and a cigar in his mouth, a turban on his head and attired like an ancient Indian prince. Many devotees who are gifted have seen his apparition, and one among them was a Chinese who saw him entering the temple compound on a white horse in full white Indian attire and was astounded by what he saw. After witnessing such an incident, the said Chinese assisted financially to build a small altar on the present site. The devotees whose vows are fulfilled make offerings or poojas according to their means. Some will offer "prasatham", some offer live cockerel or goats, others sacrifice goats or cockerel and perform "padayal". The non-vegetarian pooja/padayal is offered to "Lord Muniandy".

How to Reach Janaki Mandir

The nearest Railway station is Jalan Baru. The nearest Airport is Malaysian airport