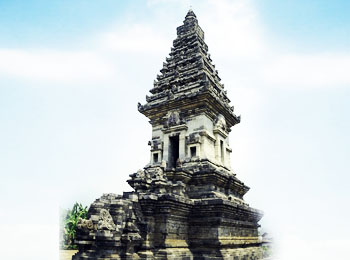 The Jawi temple is popularly called Candi Jawi in Indonesia. It was originally called the Jajawa. The temple is a syncretic Hindu-Buddhist candi (temple) dating back to the late 13th century and built by the Singhasari kingdom. The temple is situated on the eastern slope of Mount Welirang, Candi Wates village, Kecamatan Prigen, Pasuruan, East Java, Indonesia. It lays approximately 31Kms west of Pasuruan city and 41 Kms south of Surabaya. The temple is situated on the main road between Kecamatan Pandaan - Kecamatan Prigen and Pringebukan. The temple was initially thought to be a Hindu-Buddhist place of worship. But later it was found that the temple served as the mortuary for King Kertanegara, who was the last emperor of the Singasari Dynasty. The temple was built in honor of the king upon his death. The ashes of the deceased king is also said to have been placed in two other temples of Indonesia namely the Singhasari and Jago temple.

The Nagarakretagama canto 56 mentions this temple by the name Jajawa. King Kertanegara of Singhasari had ordered the construction of this temple to provide a place of worship for the followers of Shiva-Buddha sect, a religion group which had the king’s patronage.

The temple compound measures 40 x 60 sq m and is enclosed within a wall that is 2m high. The temple compound is built of red bricks and is surrounded by a moat filled with flowering lotus plants. The temple measures 24.5m high with the base measuring approximately 14.2m x 9.5m in dimension. The temple’s structure is generally tall and slender with a towering roof which has a design combining the shape of a cube and a stupa. The door leading to the main cella and the primary staircase faces the direction east.

According to Nagarakretagama, King Hayan Wuruk of Majapahit visited the Jawahi temple in the year 1359 CE, on his return from an extended tour of the eastern provinces. The purpose of his visit was to make offerings at the shrine of his great-grandfather Kertanagara who was the last king of Singhasari, in whose memory the temple had been built. The Nagarakretagama describes the magnificence of this sacred temple compound in detail. The principal monument is especially said to be unique. The temple is described as a Shivaite sanctuary crowned with a Buddhist ornament. The shrine hence clearly projects the advanced religious philosophy propagated by emperor Kertanagara, who is believed to have returned to heavenly realm of gods 'Shiva Buddha', after his death. The shrine further had two mortuary statues of the king, representing the essence of both Hinduism and Buddhism. Scholar Prapanca explains the disappearance of the Buddha Akshobya, when the monument had been struck by lightning in 1331 CE. While regretting that the statue had vanished, it was accepted as a sign of the Buddha's supreme manifestation, Sunyata that of non-being or nothingness.

Idols of various Shivaite deities such as Lord Ganapathi, Durga Devi, Lord Brahma and Nandiswaran were discovered from the temple premises. Presently, these idols have been removed from the temple and are being preserved in the museums. The statue of Durga is kept in the museum of Mph Tantular at Surabaya, while the rest are preserved at Trowulan Museum. The statue of Lord Brahma however stands missing. It is believed to have probably broken, since fragment of the statue were found in the temple's store room. The temple was renovated twice, once between 1938-1941 AD and then between 1975-1980 AD. The reconstruction of the temple was completed in the year 1982.

The Soekarno-Hatta International Airport at Jakarta can be called the gate way to Indonesia. Located 00 the capital city, the airport plies flights to countries all over the world. There are also other airports in Indonesia such as the Ngurah Rai airrport at Bali and Polonia airport of Medan, in north Sumatra, which operate flights connecting different cities of Indonesia. Garuda is the national carrier which is considered the most important airline of the country.

Other Way To Reach

Indonesia, being a island nation comprising a chain of islands, has an efficient water ways. Semarang, Jakarta, Bali, Pontianak, Tanjung Pinang, Kupang and Balikpapan are the various seaports for entry into Indonesia. A number of cruise liners on the South-East Asia circuit males a halt at least once, in one of the above ports of Indonesia.