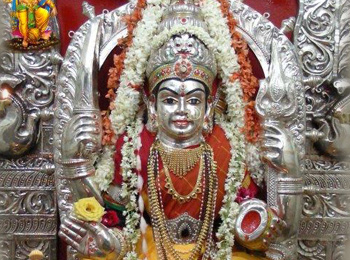 Nandangadda is a small coastal village located in the Uttara Kannada district of the state Karnataka, India. The Jai Santoshi Mata Temple lies at a distance of 4 km from the town of Karwar, on the banks of Kali River. The prime deity of this temple is Shri Jai Santoshi Mata, who is considered the daughter of Lord Ganapati. According to few folk tales, Goddess Santoshi is believed to be the reincarnation of Goddess Durga, who is an embodiment of power and stands for moral order. A large number of devotees visit the temple throughout the year especially during the festive days.

The devotees of this temple witness the Deepotsav ceremony on all Tuesdays and Fridays. The entire temple compound is lit with lamps on these days as part of the Deepotsav celebrations. The Ugadi Laksha deepotsav (one lakh lamps lighting ceremony on Ugadhi) is held at this temple during the holy Hindu month of Shravan. Mangala Karya, Navaratri Pallaki Utsav and Vrut-Udyapana are some of the other festivals celebrated here.

How to Reach Karwar

The Dabolim Airport at Goa is the nearest airport to this temple. This temple at Kanwar can be reached from this airport in about two hour time. Dabolim Airport is well linked to some of the major cities of India, such as Delhi, Bangalore, Hyderabad, Chennai, Chandigarh, Ahmedabad, Pune and Lucknow.

The Karwar Railway Station is well connected to some of the major cities of India such as the New Delhi, Bangalore, Mysore, Chennai, Mumbai, Coimbatore, Ahmedabad, Jaipur, and Patna, etc through regular train services.

Frequent and regular bus services are available to Kanwar from major town and cities of the Karnataka such as Bangalore, Mysore, Udipi, etc.