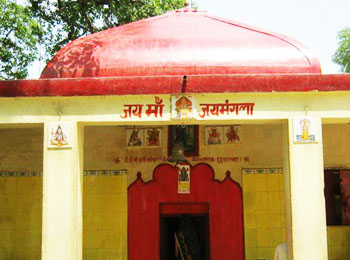 The deity of Goddess Mangla is worshipped at the sacred Jai Mangla Temple which is located at Jaimangalpur in Begusarai, Bihar. This town is famous among the tourists and locals while thousands of devotees visit the temple during the year. Festivals of Navratri and Deepavali are celebrated on a large scale at this temple. Many meditators also gather at the temple to be a part of tantric meditation.

The town of Jai Mangla Garh is located nearby Kabar Lake on an Island. The deity of Goddess Chandi Mangla Devi created of black colour is enshrined in the temple. The Island was named after the King Mangal Singh and the diggings of 1955 revealed that this temple dates back to the Buddhist era. Some of the articles found during the excavation included engraved coinage, pottery dating back to 721 AD and a few deities of Buddhist and Hindu Gods. Few artifacts are also kept in the temple campus and Indian museum Kolkata. It was renovated by Oiwar family in the 15th century. The deity of Goddess Astbhuji is also enshrined on the eastern wall and a lamp is always lit in the temple as there is only one entry door.

The festivals of Shardiya Navratra or Ashwin are celebrated with great joy at the temple.

How to Reach Begusarai

The Patna Airport is nearest to the temple and it is only 127kms away.

Begusarai Railway Station is nearest to the temple and it is well connected to the other major cities of India.

Frequent road transport is available to reach the temple. The National Highways 31 and 28 are well connected to the various interior parts of the district and other major cities.