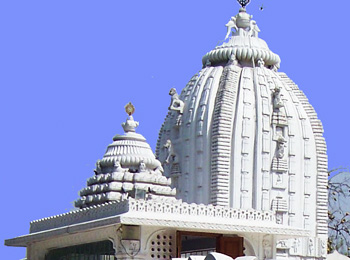 The Jagannath Temple is dedicated to Lord Vishnu and is located in Hauz Khas, Delhi, India. The Paramparik Vastukar from Puri, constructed this oldest Jagannath temple in NCR. This famous temple draws visitors from all over the country and it is famous for the Rath Yatra festival that is held here annually.Jagannath is considered a form of Vishnu or his avatar Krishna by the Hindus. Jagannath is worshipped as part of a triad on the ''Ratnavedi'' (jeweled platform) along with his brother Balabhadra and sister Subhadra by his devotees. The icon of Jagannath is a carved and decorated wooden stump with large round eyes and with stumps as hands, with the conspicuous absence of any legs. The worship procedures, practices, sacraments and rituals of Jagannath do not conform with those of classical Hinduism. Though in certain Oriya literary creations, Jagannath has been treated as the Ninth avatar, by substituting Buddha. Jagannath considered as a form of the Hindu God Vishnu, is non sectarian and has not been associated with any particular denomination of Hinduism in entirety, though there are several common aspects with Vaishnavism, Saivism, Shaktism, Smartism, as well as with Buddhism and Jainism. The oldest and most famous Jagannath deity is established in Puri. The temple of Jagannath in Puri is regarded as one of the Char Dham. The Puranas relate that the Narasimha Avatar of Vishnu appeared from a wooden pillar. It is therefore believed that Jagannath is worshipped as a wooden idol or Daru Brahma with the Sri Narasimha hymn dedicated to the Narasimha Avatar. Jagannath when worshipped alone is called Dadhi Vaman. Every year in the month of Bhadra, Jagannath is dressed and decorated in the form of the Vamana avatar of Vishnu. Jagannath assumes the Vamana Avatar during the annual Rath Yatra. Jagannath appeared in the form of Rama another avatar of Vishnu to Tulsidas, whom he worshipped as Raghunath when visiting Puri in the 16th century From the times of Chaitanya Mahaprabhu Jagannath has been strongly associated with Krishna.Jagannath is identified with Buddha considered the ninth avatar of Vishnu by Hindus.Jagannath is said to assume the form of any God to satisfy his devotee's desire.