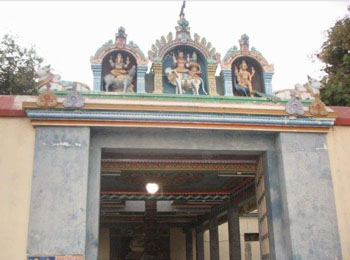 Sri Hridayaleeshwara temple is a Hindu temple, located at Tirunindravur near Chennai, India. This temple has a trust which was formed by Mr. P.S.Saathappa Chettiar. This trust is maintained by his successors.

The ancient temple of Hridayaleeshwara has the west facing entrance with a beautiful tower. In front of the main shrine, the flag staff and Nandi idol are located. The main shrine has the sanctum of Lord Hridayaleeshwara in the form of a big Shiva Lingam idol facing the east direction. Along with Shiva Lingam, the idol of the devotee Poosalar is also present. There is a separate shrine for the Goddess Maragadhambal.

The corridor surrounding the shrines of Hridayaleeshwara and Maragadhambal has the idols of Surya, Chandra, Raja Simha Pallava, Polla Pillayar (Ganesh), Nalvar, Navagraha, and Bhairav. There are also shrines for Maha Ganapathi and Murugan with Valli and Devasena. The shrine is very ancient and the architecture is like the back side of the sleeping elephant. The roof has some beautiful paintings. The wall surrounding the main sanctum has the idols of Ganesh, Dakshinamoorthy, Vishnu, Brahma, Durga, and Chandikeshwara. The Saptamata idols are present in the outer corridor of the temple. 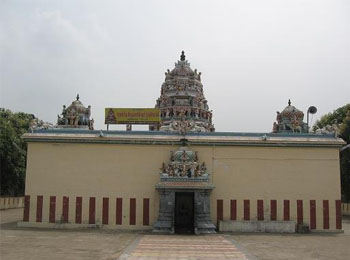 The temple is close to Lord Bhaktavatsala Perumal temple in Tiruninravur on the outskirts of Chennai. Poosalar, who hailed from Ninravur, was a great devotee of Lord Shiva. He longed to build a temple for his Lord, though he was very poor. He was desperate and distressed beyond words. Suddenly he thought "Why not I attempt to build a temple for my Lord in my heart? Why should I beg those worthless persons who have no devotion for my Lord?" Then, a determined Poosalar studied the Agama Shastras and consulted knowledgeable Shivacaryas. The thought took shape in his mind and gathered strength and determination.

He acquired requisite materials in his mind. He went to rich donors and collected huge amounts from them - all in the mind again. Some expert architects were approached and they formulated designs, plans and drawings. He approached artisans, renowned sculptors, labourers, and tools. He did not leave the minutest detail. On an auspicious day, the foundation stone was laid by the king laid according to rituals. With infinite love and meticulous care he had the temple built brick by brick, stone by stone, pillar by pillar, sculpture by sculpture, day and night, unseen by anyone.

The god appeared in the king's dream the night before the sacred consecration date and asked him to be present at the installation and consecration ceremony fixed by Poosalar of Ninravur. The King later built a temple in Ninravur.

People suffering from heart diseases pray here on Mondays. They perform abishek, archanas and offer vastras to Lord and Mother.

The nearest airport is in Chennai.

The nearest railways station is in Tirunindravur.

Tirunindravur is 33 km away from Chennai. Bus and rail facilities are available.