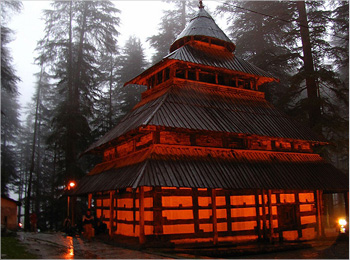 Hidimba Devi Temple dedicated to Goddess Shakti, also known as the Hidimba Temple is situated in Manali, a hill station in Himachal Pradesh. It is an ancient cave temple. The temple consecrates Hidimbi Devi, the sister of Hidimba who was a character in the Indian epic Mahabharata. The temple is surrounded by a cedar wood forest and has been built on a rock that protrudes from the ground. It was worshipped as the idol of the deity. The temple was built in 1553. Legend has it that the Hidimba Devi temple is build around a cave where Devi Hidimba did meditation "tapasya". 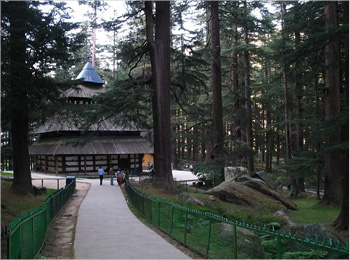 The Devi Temple has doors with intricate carvings. It also has a 24 meters tall wooden “shikhar” above the temple. The tower comprises three square roofs that are covered with timber tiles and a fourth brass cone-shaped roof on top. The earth goddess Durga, forms the theme of the main door carvings. The temple base is made of whitewashed, mud-covered stonework. An enormous rock occupies the inside of the temple. There is a brass idol of goddess Hadimba Devi. A rope hangs in front of the rock. According to legend, in the bygone days religious zealots would tie the hands of “sinners” by the rope and then swing them against the rock. About 70 meters away from the temple, there is a shrine dedicated to goddess Hadimba's son, ghatotkacha who was born after she married. 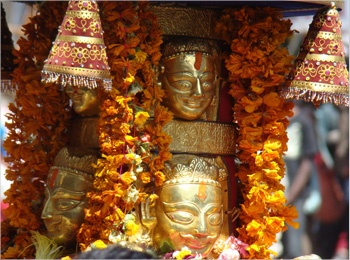 The temple was built in the ‘Pagoda style’ with no idols inside the structure. The temple structures are given character with engraved footprints that are worshipped by the devotees. The Goddess Hadimba Devi is said to the ‘mother Goddess’ of the whole valley. She is visited every day by several hundreds of devotees. 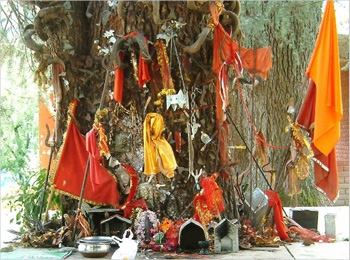 Hidimba devi is supposed to be living in this region with her brother Hadimb, very little is thought about their guardians. Naturally introduced to a Rakshas family, Hidimba promised to wed one who might crush his brother Hadimb later supposed to be exceptionally overcome and daring. Amid. During Pandav's exile when they went by Manali Bhima one of the five pandva's killed Hadimb, thus Hidimba marring Bhima and they gave birth to a son Ghatotkacha. 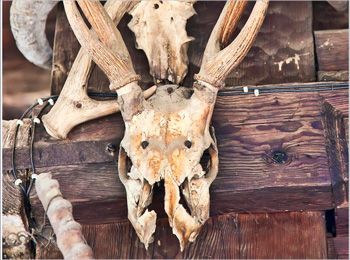 In this temple a famous fair is held every year in Hindi month of sravan in the memory of Raja Bahadur Singh ,who built the temple. This fair is popularly known as Bahadur Singh Re Jatar among locals and is also called as Saroohni.

One can visit this temple at anytime of the year barring the monsoon season which arrive in July and August when rainfall perpetuates landslides. The best time to visit the temple is during Hadimba Devi festival that comes on the month of May. This festival attracts plenty of devotees and pilgrims to the temple. In this temple every year on May 14, a colorful fair that features interesting folk dance performances is organized to celebrate Goddess Hadimba Devi’s birthday.

The nearest airport is at Bhunter in Kullu. It is about 50 km from Manali. In Manali there isn’t any rail track. Nearest metre guage station is Joginder Nagar. A couple of trains (Also known as toy trains) from Pathankot to Joginder Nagar operate daily. Shimla is another option, again is a narrow gauge railway track. The distance from Chandigarh to Manali is around 300 km. it takes almost 10 hr to reach Manali.