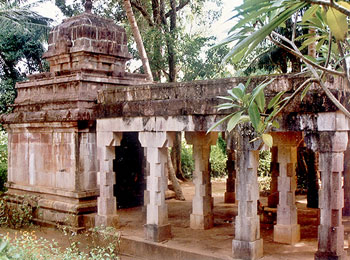 Hatakeswaram is a beautiful place located around 5 kms from Srisailam. According to legends, God Siva is said to have appeared here to a potter devotee in a Atika (Piece of Pot). Thus this place was named Atikeswaram, which later got changed colloquially to Hatakeswaram. Few people also believe that the place got its name from a particular yogic school known as Hatayoga, which is considered one among the eighty forms of Yoga (Astangayogas). Some medieval historians have been credited to have located a laboratory of Alchemy (Rasayoga) at this place.

The Hatakeshwara temple is primarily dedicated to Lord Shiva who is known here as the Hatakeswara Swamy. The temple boasts of a mystical Shiva lingam. Despite its small size, this temple is credited with excellent architecture. The temple comprises an open Mukha-mandapa with many pillars and a main Garbhagriha(Sanctum). The temple is a historically significant one. It is the place from where the much revered saint and philosopher Sri Sankaracharya wrote one of his philosophical treatises.

According to legends, a humble potter was an ardent devotee of Lord Shiva. He is said to have donated his food to the other Saivite devotees. One day in order to test his devotion, Lord Shiva took he form of a pilgrim and begged the potter for food. Unfortunately, the poor potter didn’t have any food left over at his house. Disheartened by his inability to offer food to the pilgrim, the potter is believed to have prayed Lord Shiva. Pleased by his utmost devotion, the Lord is said to have appeared in a pot. This is the reason why this temple is known by the name of Atikeswaram, from the word Atika, meaning a piece of pot. The place Atikeswaram later came to be called Hatakeswaram.

Devotees believe that visiting the Hathakesvara Temple and seeking the divine blessings of Hatakeswara Swamy relieves them from various health related ailments. The Shiva Lingam is said to possess unbelievable powers to cure devotees of many illnesses.

How To Reach Srisailam

The nearest airport to Srisailam is the Hyderabad airport which lied at a distance of 237 km.

The nearest railway station is located at Nandyal at a distance of 158 kms away from Srisailam. People generally prefer going to Hyderabad or Secunderabad and then taking a bus or a car from there.

Srisailam is a popular town in the state of Andhra Pradesh which is well connected by regular state owned buses from most towns and cities in A.P.