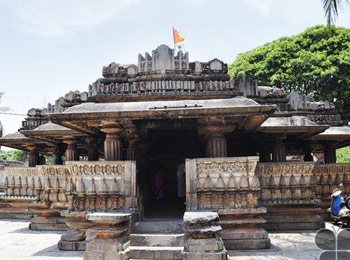 The Harihareshwara Temple is located in the Davanagere district near the town of Harihar. This wonderful temple is the abode of Lord Vishnu. The temple is also known as God’s Own House. The hills of Harihareshwar, Pushpadri, Harishinachal and Bramhadri surround this place. Harihareshwar also boasts of clean and pristine sandy beaches.

The architecture in the Harihareshwara temple resembles that normally used by the Hoysala dynasty. The mantapa or hall as it is called is square in shape. The pillars and the ceiling have exclusive architecture and decoration like lotuses. The Hoysalas used soapstone for building the temple. There is a lot of repair work which is being carried out here and the Vimana is being replaced with mortar and brick ceilings. The temple houses contemporary Kannada inscriptions and you will find them quite interesting.

The Harihareshwara temple has an interesting history. It is said that the demon Guha appeased the creator of the universe and got a “vardan” or boon. As per this boon, neither Shiva (Hara) nor Vishnu (Hari) could destroy him single handedly. Guha started torturing the gods in Indralok as well as human beings in the prithvilok and it became difficult for everyone to withstand his devastation. As both Shiva and Hari could not destroy him on their own, they had to unite and take the form of Harihara to destroy Guha.

How To Reach Mumbai

Mumbai airport is the closest to Harihareshwara. The trains that ply on the Konkan route halt here. There are local taxis available which are slightly expensive. Private buses also ply on this route.