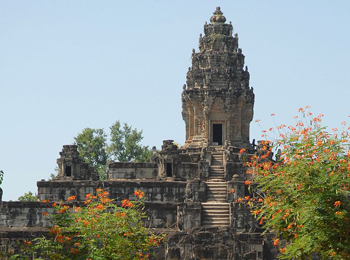 Hariharalaya was an ancient city and capital of the Khmer empire located near Siem Reap, Cambodia in an area now called Roluos. The name "Hariharalaya" is derived from the name of Harihara, a Hindu deity prominent in pre-Angkorian Cambodia. The name "Harihara" in turn is a composite of "Hari" (one of Vishnu's names listed in Vishnu sahasranama) and "Hara" (meaning the Hindu god Shiva). Cambodian representations of Harihara were of a male deity whose one side bore the attributes of Vishnu and whose other side bore the attributes of Shiva.

Toward the end of the 8th century A.D., the Cambodian king Jayavarman II conquered vast territories near the great lake Tonle Sap. For at least part of this time, he established his capital at Hariharalaya. However, when he declared himself the universal monarch of the country in 802 A.D., he did so not at Hariharalaya, but at Mahendraparvata on the Phnom Kulen Plateau. Later, he returned the capital to Hariharalaya, where he died in 835. Jayavarman II was succeeded by Jayavarman III and then by Indravarman I, who were responsible for the completion of the royal temple mountain known as the Bakong and the construction of Indratataka baray. Indravarman I consecrated the temple’s dominant religious symbol, a lingam called Sri Indresvara (the name is a combination of the king’s name with that of Shiva), in 881. Indravarman I also constructed the much smaller temple today called Preah Ko ("Sacred Bull"), dedicated in 880. In 889, Indravarman I was succeeded by his son Yasovarman I, who constructed the temple of Lolei (the name may be a modern corruption of "Hariharalaya") on an artificial island in the middle of Indratataka. Yasovarman also founded a new city at the site of Angkor Thom north of modern Siem Reap and called it Yasodharapura. Yasovarman made the new city his capital and constructed a new royal temple mountain, known as the Bakheng. Yasodharapura was to survive until the 1170s when it was sacked by invaders from Champa.

How to Reach Siem Reap

Flying in to Seim Reap by plane is the best option. Siem Reap International Airport is the second largest airport in Cambodia. Second best option is to take a bus ride to Siem Reap. Tourist, generally arrive by air, but some take a pleasurable journey to Siem Reap on cruise ships.