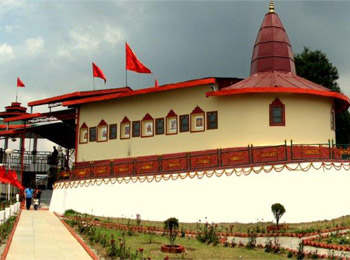 Hanuman Tok is a Hindu temple complex which is located in the upper reaches of Gangtok, the capital of the Indian state of Sikkim.

The word “Tok” in local language means temple. Hanuman Tok is a famous temple in Gangtok dedicated to Lord Hanuman. The temple is situated at an altitude of approximately 7200 feet on the upper reaches of Gangtok and is known for its serene atmosphere and surreal vista of mighty Kanchenjunga. Visitors need to climb stairs to reach the top where the temple is perched.

As the legend says, locals used to worship a stone here for centuries. In 1950s a political officer named Appaji Pant had a divine dream at this place and after that the idol of Lord Hanuman had been erected here. Since then the temple is locally known as the Hanuma Tok. In 1968, the temple was handed over to the Indian Army. Currently, the temple is maintained by the Units of 17 Mountain Division of the Army. Right above the temple, there is a famous shine of Sirdi Saibaba.

From the parking lot when you start climbing the paved stairs of the temple, there are benches to rest and soak in the greenery around. However the climb is relatively easy and doable for all. Prayer bells hang from above. Ring a bell and it makes a resonating sound. Prayer chants and sometimes religious music are played through the fitted audio speakers.

The closest airport is Bagdogra Airport, (IATA airport code IXB) in Siliguri, 16 km (10 mi) from Siliguri Town. The nearest railhead connected to the rest of India is the station of New Jalpaiguri in Siliguri, situated 124 km (77 mi) away from Gangtok. Taxis are the most widely available public transport within Gangtok.