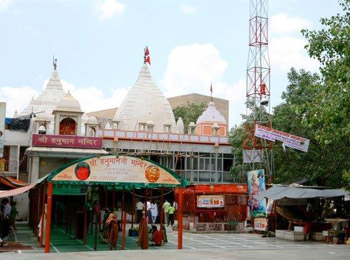 Hanuman Temple in Connaught Place, New Delhi, is an ancient Hindu temple and is claimed to be one of the five temples of Mahabharata days in Delhi. The temple is situated on the Baba Kharak Singh Road (old Irwin Road), at a distance of 250 m southwest of Connaught Place. 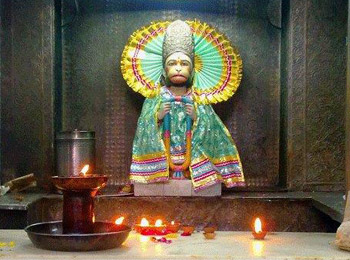 The approach is through a set of marble steps from the road level leading into the main foyer of the temple through massive silver-plated doors, which are engraved with scenes of the epic Ramayana story. The foyer is ventilated with clerestory windows that are adorned with paintings of Hanuman in the cardinal directions depicting his four aspects. Below each Hanuman painting, the full text of Tulsidas’s Sundar Kand is inscribed on the marble tablets affixed on the walls. The Sanctum Sanctorum, which houses the Hanuman idol, is on the north wall on the right side of the entry foyer, with the idol facing the southern direction in a small bas-relief carving. Images of Radha and Krishna, a central triumvirate of Rama, Lakshmana and Sita are also installed to the right of the Hanuman idol on the same wall.

The idol in the temple depicts the lord as a young child. The devotees can see only one eye of the idol as it is facing south. He holds a 'gada' (his weapon) in the left hand while the right hand appears to be on his chest as a symbol of regard to Rama, Lakshmana and Sita. Images of Rama, Lakshmana and Sita, along with the idols of Radha Krishna, have been placed on the right side of the idol of Hanuman. The nonstop chanting of the Maha Mantra 'Sri Ram, Jai Ram, Jai Jai Ram', since 1 August 1964 in the temple has been recognized in the Guinness Book of Records.

The Hanuman Temple was built by Maharaja Man Singh I of Amber in 1724 during Emperor Akbar's reign. However, the foundation of this temple is said to date as far back as the time of the Mahabharata war. The idol of this temple is believed to be a 'swayambhu', that is, a self-created structure. Interestingly, the temple has a crescent moon (an Islamic symbol) in the spire (viman), while all the Hindu temples have the Hindu symbol of Sun or Aum. In accordance to the Hindu legends, it is said that five temples were built by Pandavas after they defeated the Kauravs in the Kurukshetra war. The Hanuman Temple at Connaught Place is one of those five temples. When Tulsidas traveled to this temple he pleased the emperor with a marvel, which earned him a reward. The emperor presented a crescent moon symbol to the Hanuman Temple as he was a follower of Lord Hanuman. It is believed that this Islamic symbol of crescent moon saved the temple from being demolished by the emperor.

Hanuman Jayanti (birthday celebrations of lord Hanuman) is held every year with great fanfare on the full moon (Purnima) day in the month of Chaitra (March – April) as per established lunar Hindu Panchangam or Hindu calendar. Colourful processions with festoons and with devotees wearing Hanuman masks and tails and carrying large idols of Hanuman fill the streets. Commercial establishments within the temple complex sell religious offerings and bangles made of lac and plastic.

According to Hindu belief, Tuesdays and Saturdays are the special days to worship Lord Hanuman. Birthday celebrations of Lord Hanuman on Hanuman Jayanti.

How to Reach Delhi