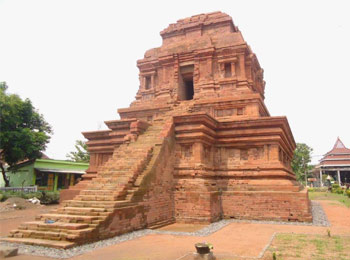 This temple is called the Gunung Gangsir Temple because of the location which is the name of the village where it belongs to: Desa Gunung Gangsir, Beji, Pasuruan, East Java. In 1830 the temple was visited by H.I. Domis, Resident of Pasuruan, and then in 1840 was visited by HN draftsman Sieburgh which makes painting on the temple ruins. J.L.A. Brandes in 1903 visited the Gunung Gangsir Temple and found this temple is the missing link between the art buildings style in Central Java and East Java.

Gunung Gangsir Temple is a temple of Stone Square sketched with each side for 14 meters. The temple faces east with an overall height of 12.50 meters (the remaining building). This temple is very rich with niches, seam and antefiks. Existing panels were decorated with reliefs depicting figures, motifs vessel with tendrils and pilasters, flowers, trees and animals.

The age of this temple is estimated from the 10th century AD, but some researchers assume that the Temple was built during the 14th century on the era of Majapahit Kingdom based architectural style. This temple is unique as the only temple in East Java that incorporates the Eastern Javanese architectural style with the shapes and decorative styles of Middle Javanese.

How to Reach Indonesia

Indonesia’s main international airport is Soekarno-Hatta International Airport, Jakarta. It’s the main point of entry for much of the country, but other airports also cater to international airlines. These include Ngurah Rai (Bali) and Polonia (Medan, in north Sumatra), which are connected by air to destinations in most major cities of the world. The national carrier is the main airline linking the country to other destinations, but some other airlines also fly to Indonesia to Manado, Biak, Amban, Surabaya and Batam.

Others Way To Go

Semarang, Jakarta, Bali, Pontianak, Tanjung Pinang, Kupang and Balikpapan are seaports for entry to the country. A number of cruise liners on the South-East Asia circuit make at least one of these a port of call.