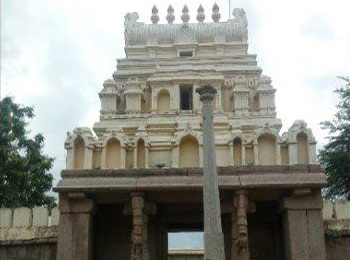 Gulur Ganesh temple is situated about 5 km away from the Tumkur town, on the Tumkur-Kunigal road. It was built about 50 years ago by Thopegowda and does not have any permanent deity. Gulur is a small village in Tumkur district. Gulur, along with Kaidala formed the erstwhile Kridapura. This place is famous for its unique way of celebration of the Ganapathi festival, especially among the locals. Currently, the temple is under renovation.

According to the priest, there lived a poor brahmana whose difficulties were only increasing with time. One day in his dream, Lord Ganesha appeared and was told by him to perform his puja and he would be relieved of all problems. But he didn't know how perform the puja. So he tried to gather information on how to perform the puja. During this, he met Sage Agastya, who was travelling from South to North and had halted in this village. He explained all his problems and also told him about his dream. Sage Agastya helped him perform the puja, the ways of which is followed even today.

The puja begins on the day of Bali Padyami (Deepavali) and continues for about one month. The annual jatra is held on the third day after the completion of the Karthika Masa.

How to Reach Karnataka

With 6 airports, Karnataka is well connected to the other parts of India and rest of the world through the air network. Karnataka is also well connected to other parts of the country through a wide rail network. Karnataka State Road Transport Corporation (KSRTC), connects the state to other major cities and states. Directions from Bangalore: Bangalore - Tumkur NH4 - Via bypass to Gubbi - Left near Maralur Lake towards Kunigal - left near Gulur circle.