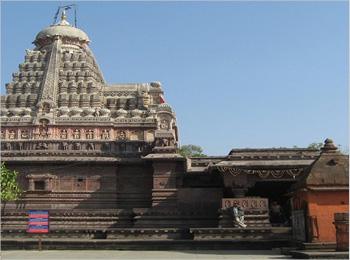 Maharashtra is one of the most industrialised states in India. It stretches from western to central parts of the country and extends over the Sahyadri hill ranges. A stretch of 720 kilometres along the Arabian sea coast provides it a picturesque backdrop. The present state of Maharashtra was formed on May 1, 1960 on uni-lingual principle by carving it out off the erstwhile Bombay region, which predominantly spoke Marathi language from the areas of formerly princely state of Hyderabad and the Central Provinces and Berar. 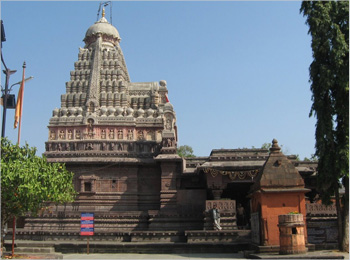 The Grishneshwar Jyotirlinga Temple is one of the ancient and holiest shrines of India. This temple is the holy abode of one of the 12 Jyotirlingas of Lord Shiva present in India. The temple is located at a distance of 11kms from Daulatabad near Aurangabad in Maharashtra. Daulatabad was once known as Devagiri. Ahilyabhai Holkar constructed the Grishneshwar Temple and also also re-constructed the Kasi Viswanatha temple at Banaras and the Vishnu Paada temple at Gaya. Grishneshwar is also known as Ghushmeswara. Lord shiva here is also known by Kusumeswarar or Ghushmeswara.

Madhwamunishwar quotes - blessed by VerulNagar, there is no other place like is on earth, where Lord Grishneswara resides is the best place on this earth.” 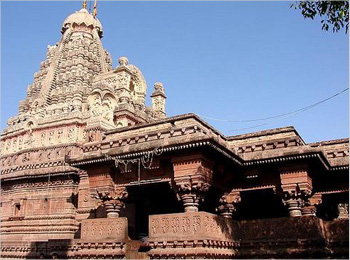 The presiding deity of this temple is Lord Grishneshwar (Lord Shiva) in the form of Lingam, facing east. Each Jyotrilinga temple depicts different manifestation of Lord Shiva and the idol Lingam itself is considered as the deity in every Jyotrilinga temple. Lingam represents infinity, the nature of Lord Shiva, that which is without any beginning or an end. The temple boasts of beautiful carvings and sculptures of Hindu gods and Goddesses. The Grishneshwar Temple represents the primeval architecture and culture of Hindu temples. The temple is built of red rocks with two tiered Vimanam (the tower above the inner sanctum). And is renovated in 18th century by Ahilyabai Holkar. On the way to the temple, the ten avatars of Lord Vishnu (Dasavatars) are carved on a red stone which is very amazing and renders an ethereal look to the temple. There are many beautiful carvings and statues all around the temple. 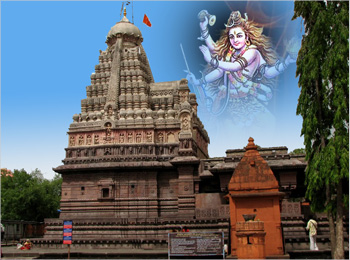 According to Shiva Mahapuran, to the south of a mountain called Devagiri near Aurangabad lived a Brahmin called Brahmavetta Sudharm along with his wife Sudeha. The couples were childless because of which his wife Sudeha was sad. Sudeha prayed and tried all possible remedies to get the child but in vain. Frustrated of being childless, Sudeha got her younger sister ( Grishna) Ghushma married to her husband Sudharm . Ghushma was a devotee of Lord Shiva.She used to make 101 Lingam, worship them and discharge them in the lake nearby. With the blessings of Lord Shiva, Ghushma gave birth to a baby boy. Seeing this Sudeha was jealous of her sister. Time went by and one night she killed Ghushma’s son who was fast asleep and threw him in the lake where Ghushma used to discharge the lingams. Next morning Ghushma and Sudharm got busy with their daily rituals and went about worshipping Lord Shiva like every day. Sudeha too got up and started performing her daily chores. Ghushma’s daughter-in-law, however, saw stains of blood on her husband’s bed and parts of the body drenched in blood in her room . Horrified, she narrated everything to mother-in-law Ghushma who was absorbed in worshipping Lord Shiva. Ghushma did not even deter by hearing that . Even her husband Sudharma did not move an inch after hearing the death of his son. Even when Ghushma saw the bed drenched in blood she did not break down and said he who has given me this child shall protect him and calmly started reciting ‘Shiva’ s name and went to worship him. Later, when she went to discharge the Shivalingas, after her prayers she saw her son coming out of lake . Seeing her son alive, Ghushma was neither happy nor sad. At that time Lord Shiva appeared before her and said – I am thoroughly pleased with your devotion. Your sister had killed your son. Ghushma told Lord to forgive her sister Sudeha and emancipate her. Pleased with her ultimate generosity, Lord Shiva asked her to wish something that he will bestow on her. Ghushma said that if he was really happy with her devotion then he should reside here eternally for the benefit of all in the form of a Jyotirlinga and may you be known by my name called Grishneshwar or Ghushmeshwar. On her request, Lord Shiva manifested himself in the form of a Jyotirlinga and assumed the name Ghushmeshwar ( Grishneshwar) and the lake was named as Shivalaya thereafter. 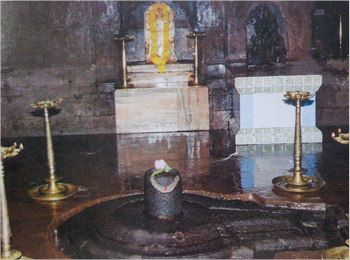 There are a few small hotels and lodges near the temple and caves, but it is a better option to stay in Aurangabad, which has plenty of hotels to fit all budgets.

Any time of the year.

Grishneshwar Temple is situated around 35 kms from Aurangabad and 20 kms from Daulatabad and is accessible from both the cities by bus and sharing Taxis. It is 100 Kms from Manmad, 174 kms from Nasik and around 250 kms from Pune.

Nasik and Aurangabad cities have airports.