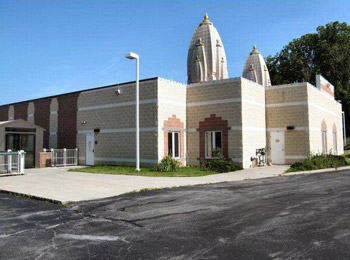 There are many altars in the main temple, including two main ones. They are Shiva on the left and Vishnu on the right as seen from the entrance. In addition, there is a prominent image of Ganesa, immediately on the outside of the altar of Shiva. Goddess Durga is situated between the Shiva and Vishnu altars. In front of Shiva altar is Shiva’s vahana (mount), Nandi, the bull, looking toward the Shiva lingam (Shiva image in the form of a cylindrical black granite stone). Throughout the walls of the temples are niches with deities. Idols of the goddess Laxmi and the goddess Durga are situated between the Vishnu and Shiva altars. The shrine has an extensive wetland area on its property, which makes the setting very aesthetically pleasing.

There are three poojas (prayers) every day before noon and two nightly poojas. There are special events on Saturday and Sunday.

Parma has an airport connected to Roma, London Stansted, and Paris Beauvais. The airport is connected to the city by bus. Taxis are also available.

Parma is on the main railway line connecting Milan to Bologna.

One can buy tickets on the bus. To reach Parma by car one can take the motorway (toll way).