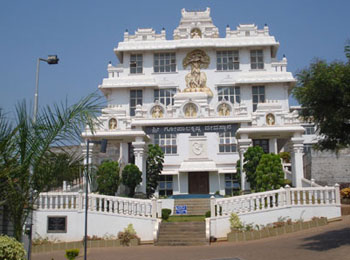 The Santhanagopalakrishna temple was established around 400 years ago by Late Shri Thimmappa Bhakta. Fed up by the outrages of the Portuguese, Bhakta families moved from Goa to Kumbla, a trade and commerce centre with port facilities that was formed in 1560 A.D. Around the year 1600 A.D. many of the Bhakta families did not had any en to descendants. This matter was brought up in Srimadanantheshwar Temple in Manjeshwar. As a solution the Bhakta families were adviced to install an idol of Shri Santhanagopalakrishna near their dwelling and treat the same as their family deity. In accordance to the same an idol was installed by Shri Thimmappa Bhakta as the family deity. In search of living, many family members went to different places. Hence, the thought of having a temple for the guardian deity did not occur to anyone. Later on Shri Gurudatt D. Bhakta, a descendant of the Bhakta family, who belonged to Mapusa, Goa made an effort to rebuild a temple at this place. Subsequently the deities were reinstalled in the shrine on 19th February 1997. From then on the daily viniyoga sevas started happening. An annual celebration was also organized by a registered trust. 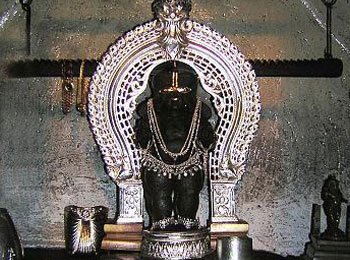 The temple of Sri.Santhana Venu Gopala, is well-known for its Tribhangi Kolalu Gopala. The temple has been constructed as per Hoysala architecture at the Garbhagriha, while the outer edifice is of Vijayanagar times or later. The entry to the temple is covered. After crossing the main Gopura, one finds himself a big compound which houses the main temple. Visiting this place reminds one of the Kere Tondanur Sri.Venu Gopala temple. Upon entering, one can find columns or pillars of Vijayanagara times and the Udbhava Narasimha which is a treat for the eyes. 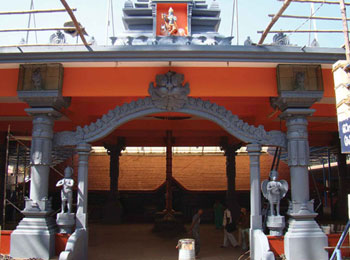 The main idol is Sri.Krishna in Tribhangi style and with the Gopikas, cows. Gopala and Sanath Kumara are a treat for the eyes. Presence of the ant hill behind the Garbha Griha, makes this temple unique as it is a uncommon existence and it is also worshiped by the people. The other deities installed in the temple are Hanuman,Benne Krishna,Mahaganapati,Garuda and Kalingamardana. 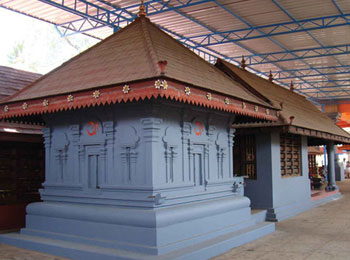 The village of Hemmaragala was under the control of many rulers. The first recorded were the ‘gangarasaru’. During their time, when the king ‘gangarasa’ was about to commence a military expansion drive, Lord Krishna came in his dreams and divined the victory of the king, and also said that while on the return journey, his chariot would break down and on the exact spot where the idol of lord Krishna; Sri Santana Venugopalaswamy was buried. He ordered the king to recover it and bring it to the hermitage of Maharishi Koundinya and get the idol installed by the divine hands of the Maharishi. As prophesied, the king while on the way back from the battle the next day, the incident took place. The idol was retrieved and was installed by the great maharishi Koundiyna. This temple later came under the management of the ‘hoysalas’.Their king Veeraballava donated lands to the temple for the daily needs of the rituals in the year 1298 AD in the month of Phalguna, on a Tuesday.

The temple by itself is of Hoysala architecture at the Garbhagriha, but the outer structure is of Vijayanagar times or later.

Few Stories about the temple


The story behind as to how the lord got the name Hucchu Gopala is a very fascinating and divine one. The Chola king who reigned over this area had 12 daughters, didn’t have a son. ON coming to know about the divine powers of the lord Sri Venugopalaswamy, the king along with his whole family came to the temple and prayed that he beget a son to continue his lineage. In due time the queen conceived and the mood in the whole palace was of joy and excitement. But, to the shock of everybody the baby turned out to be a girl again. Feeling depressed, the king along with his wife, came back to the temple and decided to give up their lives in the temple itself. They sat down praying to the lord. All night passed and in the early hours of the morning, when the couple wanted to take one last look at their new born daughter before sacrificing themselves, to their utter shock, astonishment and joy found out that the new born girl had turned to a boy. The couple out of happiness and devotion, named the idol as ‘hucchu gopala’ (hucchu = mad) for the astounding way in which they begot a son and the name got stuck to the deity ever since. The lord here is celebrated by various names, some of them being bala gopala, hucchu gopala, venu gopala, sri santana venugopala etc. Another wonderful feature is the DANDA, that is still present in the temple even today. It was handed over to the temple by the great Maharshi Koundinya. The Danda, believed to have enormous powers, is believed to deliver people of their problems be it health wise, monetary wise etc. The danda is supposed to hold the powers of maharishi Koundinya who transmitted it onto this sacred danda to help the people who are in need in his absence, as he departed to the heavenly abode. This danda is open to public darshan and the ‘Danda Sparsha’ is done only on Saturdays and Sundays from 6AM-6PM.


The idol of the deity here portrays the deity holding a baby in the hands waiting to be handed over to the devotee. Couples who do not have children offer prayers and sevas in this temple and are blessed with a child.


There are no hotels available, it is better to stay in Nanjangud


Take the Bangalore Mysore highway, upon reaching Mysore, proceed towards Nanjangud. After visiting Nanjangud temple, take the road which goes towards the Chamarajanagara. Upon reaching Chinnadangudi railway station onto your left, proceed for about 2 kms take a right turn and you will find a temple arch, follow the route to reach the temple.


Nearest railway station is at Mysore. It is better to reach Mysore by train and take the road to reach faster as the railway frequency between Mysore and Chamarajanagara is once a day.


The nearest airport is Mysore, but it is advisable to reach Bangalore as it is highly linked to other parts of India