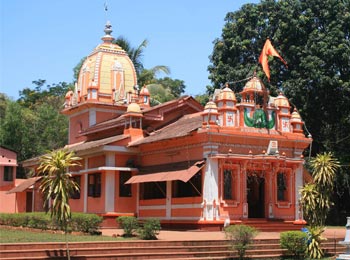 The Shri Gopal Ganapati Temple is situated in North Goa.

The Shri Ganesh temple also known as the Shri Gopal Ganapati temple is set amidst beautiful natural surroundings at Farmagudi of Ponda Taluka. This Temple was dedicated to Elephant God Ganesha. According to the history, the Portuguese Viceroy attacked the fort of Ponda in October 1683 but had to beat a quick retreat at the sudden appearance of the Maratha King Sambhaji with a large army. Farmangudi commemorates this event. The stone image of Gopal Ganapati was discovered by herdsmen while grazing cattle near the hill and later installed in a small shrine with a thatched roof. The temple built by late Shri Dayanand Bandodkar the first Chief Minister of Goa has the idol made of metal alloy consecrated on 24th April 1966. It is a good specimen of Indian temple architecture synthesizing both ancient and modern. This temple is well kept and has a beautiful deepasthmabha in front and flooring of temple is bright and beautiful carved with Radhe Krishna motif. There are dwarapalakas on either side of the sanctum and a huge idol of Ganesha adorned with Silver.

Apart from the main puja that is held every Tuesday, the temple also celebrates Ganesh Chaturthi with great pomp and fervour.

The Dabolim Airport lies just 29 kilometres from the state’s capital, Panjim. The two major railheads in Goa are Madgaon and Thivim, which are well connected by trains from all over the country. There are a number of public as well as private bus operators in Goa, which offer options for intra-city and inter-city conveyance.