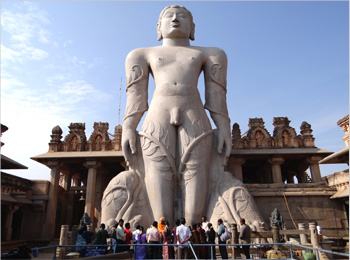 
The temple is situated at a distance of 140 Kms from Bangalore, 50 Kms from Hassan and 83 kilometres from Mysore, Shravanabelagola is one of the most popular Jain pilgrimage center in South India. This place is named after the pond in middle of the town (Bela-Kola means White Pond). This is one of the popular weekend getaways from Bangalore and a major heritage site in Karnataka. 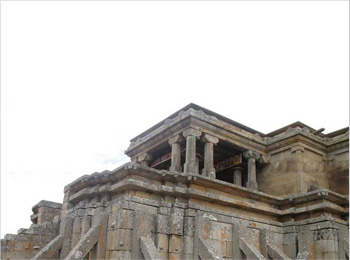 Shravanabelagola is famous for two hills called Vindhyagiri and Chandragiri where most of the monuments are located. These two hills are spread on both sides of Temple Pond. There are several historical basadis within the town as well. The main temple of Gomateswara is located on Vindhyagiri hill along with Odegal Basadi, Tyagada Kamba, Siddhara Basadi, Chennanna Basadi, Akhanda Bagilu, etc. Chandragiri is home for about 14 shrines among which Chamundaraya Basadi, Chandragupta Basadi, Chandraprabha Basadi, Kattale Basadi and Parshwanatha Basadi are important. Shravanabelagola is famous for the Bahubali Statue which is supposed to be the tallest monolithic stone statue in the world with a height of 58 feet carved out of a single block of granite. The Gomateswara temple is built on top of a hill at an altitude of 3347 feet, called as Vindhyagiri hill (also known as Doddabetta or Indragiri). About 620 steps provide access to this temple from bottom of the hill. The nude statue of Bahubali is carved carefully with much perfection. 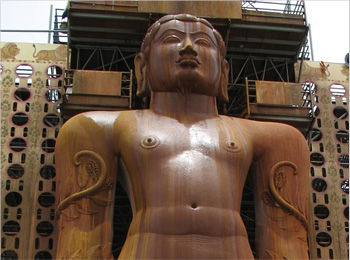 The colossal rock cut statue of  saint Gommata at Shravanabelagola is the most magnificent among all Jaina works of art.  It was built in circa 982 AD and is described as one of the mightiest achievements of ancient Karnataka in the realm of sculptural art. Also referred to as Lord Bahubali, the image is nude an stands upright in the posture of meditation known as kayotsarga, reaching a height of 17.38 meter (58 ft) atop the Vindyagiri of Doddabetta hills accessible through a flight of 500 steps. The image of Gommata has curly hair in ringlets and long, large ears. His eyes are open as if viewing the world with detachment. His facial features are perfectly chiseled with a faint touch of a smile at the corner of his lips and  embody calm vitality. His shoulders are broad, his arms stretch straight  down and the figure has no support from the thigh upwards. There is an anthill in the background which signifies his incessant penance. From this anthill emerge a snake and a creeper which twine around both his legs and his arms culminating as a cluster of flowers and berries at the upper portion of the arms. The entire figure stands on an open lotus signifying the totality attained in installing this unique statue. 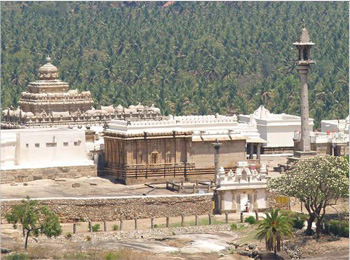 On either side of Gommata stand two tall and majestic chauri bearers in the service of the Lord. One of them is a yakshi and the other one is a yakshi. These richly ornamented and beautifully carved figures complement the main figure. Carved on the rear side of the anthill is also a trough for collecting water and other ritual ingredients used for the sacred bath of the image. Around the statue is an enclosure of a pillared hall where one can find 43 images of tirthankaras in different cloisters. There is also a figure of a woman called Gullikayajji sculpted with a good built and wearing exquisite ornamentation, typical of the sculptures of the Ganga period. The Akandabagilu or the massive door, carved out of a single rock with an elaborately carved Gajalakshmi in her typical posture flanked by two elephants, is another meritorious work of Jain craftsmanship. This also said to have been under the guidance and inspiration of Chaundaraya, the illustrious minister who served under the successive rulers of the Gangas namely Marasimha II, Rachamalla IV and Rachamalla V. One of the   largest temples in the area is the Chaundarya Basadi dedicated to Neminatha, the 22nd Tirthankara depicted under a seven hooded canopy and flanked by male chauri bearers. This temple is unique in its style. It belongs to the era of the western Gangas and is evolved out of the Chalukyan styles at Badami and Aihole. One the same hill can be seen the Chandraprabha Basadi dedicated to the 8th tirthankara by the same name. It is one of the oldest basadis on the hill and can be assigned to the early 9th century under the reign of Sivamara, a Ganga king.

While at Sravana Belgola one can also gain insights into Jaina mythology through some of the finest paintings depicted on the walls of the Sri Jains matha. Rich in colours and harmonious in composition, these paintings of the 18th century depict royal processions and festivities, monks, women in brightly coloured  sarees, forest scenes of wild animals and other topics that shed light on the domestic, religious and social life of the people. Another concrete expression of the intensity of Jaina art is the Sthambha, the free standing pillar in front of every basadi. Elegantly carved out of granite, these are classified as Brahmadeva Sthambha and Manasthambha. While the former portrays the figures of Brahmanical gods, the latter is depictive of Jaina faith. Manasthambha pillars can be found elsewhere in the country but the Brahmadeva pillars are restricted to the South, a fine specimen of which can be found in front of the gigantic statue of Gommata at Sravanbelagola. Extremely attractive is the Manasthambha at Mudabidri with a small shrine at the apex surrounded by four bells and topped with a gold finial. Such pillars at Karkala and Humcha are equally eye-catching. All these pillars, irrespective of their connotations, are exquisite pieces of art, elegance and decoration. Another pillar of immense interest is the Tyagada Brahmadevara Kamba at Sravana Belgola where Chaundaraya has inscribed his genealogy and his life time achievements. Only segments of the inscription are readable. 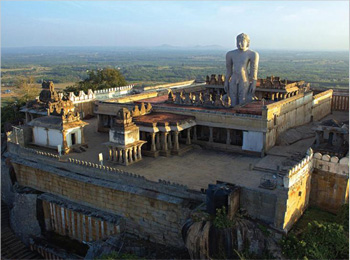 Lord Gomateshwara (Lord Bahubali) was son of the first Jain tirthankara named Lord Adinatha. Lord Adinatha had 99 other sons and when he renounced his kingdom, there was a big fight between the two brothers, Bahubali and Bharatha, over the kingdom. Bharatha lost this battle, but Bahubali did not feel any happiness on seeing his brother's defeat. He then gave the kingdom to his brother and then attained Kevala jnana (Suprreme Knowledge). The statue was carved during the period of Chamundaraya, a minister of the Ganga King Rajamalla between 982 and 983 CE. The town of Shravanabelagola is famous with several Jain temples and historical sites. There are inscriptions on the slabs near the right and left foot of the image of Gommatesvara at Sravana belgola. The inscription on the right hand slab is as follows :
Sri-Chamundarajam madisidam;
Sri-Chamundarajan "se" Yv 'v' ittan;
Sri-Gamgaraja suttalayavam madisida;
The first two lines record that Chamunda Raja caused to be made the image, at the foot of which the inscription is engraved, and the third line that Gamgaraja caused to be made the buildings which surround the image. There is a verse in Vahuvali Charitra which purports to give the exact date of the establishment of the image. That verse is as follows:
Verse
That is "Sri Chamunda Raya established the image of Gomatesa in the city of Belgula, in Kumbha Lagna, on a sunday, the fifth day of the bright lunar fortnight, in the month of Chaitra, in the praised yera Vibbhava, in the Kalki age, known as 600, when the auspicious Mrigasirh star was visible."  This date lies between a period 980-984 A.D.


Thousands of pilgrims, devotees and tourists from all over the world flock to the statue once in 12 years for an event known as Mahamastakabhisheka.


From Bangalore airport (the capital city of the Karnataka state) it’s about 145km.


From the Hassan railway station it’s about 52km. The easiest way to reach Shravanabelagola is by road.


Bus services are frequently available from all the major cities of the Karnataka state to Shravanabelagola.