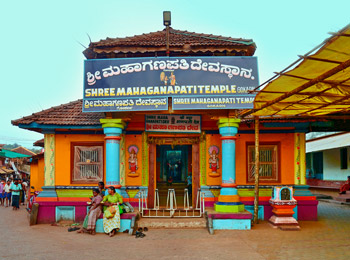 Gokarna Mahaganapati Temple is located only a couple of metres far from Mahabaleshwar Temple. This sanctuary was implicit honour of Lord Ganesha, who succeeded in taking the Atmalinga far from Ravana. According to legend, voyagers need to first visit this sanctuary before heading towards Mahabaleshwar Temple. It is additionally called as a “siddha” Ganapati. It is one of the famous and very ancient two handed Ganapati in Karnataka (the other being Idgunji). This temple, albeit located in the same premises as Gokarna Mahabaleshwar, has its own identity.

According to the tradition, this Ganapati temple was founded by the early Kadambas (5-6th century), a mighty royal family who ruled over the major part of the Karnataka and part of Goa and Maharashtra. Shree Ganesh, here in the guise of a young Brahmin with two hands, saved Lord Shankara’s Lingam from the hands of demon Ravana who had hited Ganesha; the mark is still present on the murti, who is about 5 ft tall.

In an era long before the events of the Ramayana took place, Ravana, it is said, brought a lingam from Kailasa, the abode of Lord Shiva. There are many stories regarding this Lingam. Some legends attribute it to Ravana’s ardent penance, and insistence on cutting off his heads if Shiva did not appear before him; while others say that Ravana wanted a special lingam for his mother to pray to. No matter what the reason, Lord Shiva did indeed hand over a special lingam to Ravana – the atmalingam – to take home to Lanka.

Lord Shiva may have been pleased with his devotee and the lingam was a token of his appreciation, but, to the Gods, this was a sign of danger. They feared that Ravana would soon grow invincible, and asked Ganesha for help in stopping Ravana from taking the lingam to Lanka. Ganesha approached Ravana in the guise of a young boy, while the Gods darkened the skies and created the illusion of sunset. Ravana, being the devout believer in rituals, realised he had to perform his evening rituals before sunset. He had been told by Shiva not to place the lingam on the ground before reaching Lanka, so he asked the young boy who appeared so obligingly, to hold the lingam while he performed the rituals.

The young boy agreed, but placed one condition – he would only hold it for as long as he could. And then he would call out thrice. If Ravana had not returned by then, he would place the lingam on the ground. Ravana was in a quandary, but having little recourse, agreed, and started his prayers. As if on cue, the young boy called out “The lingam is too heavy. I cannot hold it any longer. Come and take it back!” Ravana panicked, but he had already started his prayers. He signalled the boy to wait, and hurried on. To his utter consternation, the boy called out once more, and then, immediately after that, once more. Leaving his prayers unfinished, he ran, only to find the boy keeping the lingam on the ground.

Leaving the boy for the moment, Ravana turned his attention to the lingam, trying to pull it off the ground, but all his efforts were in vain. The lingam seemed to have struck roots in the ground, and, though he twisted and turned and pulled, it remained there forever. It was only when he realised the futility of his actions that Ravana turned his attention to the cause of the problem - the young boy. The boy, sensing danger had begun to run, but Ravana caught up, and hit him on the head. That’s when the boy revealed his true identity. Ravana was shocked that the gods would play such a trick on him. However, it was too late to do anything, and he gave up.

It is said that Ravana was the first to build a temple here over the lingam which had fixed itself to the ground. It came to be known as ‘Mahabaleshwara’ – the powerful one. Later, someone built another temple, to the one who responsible for the lingam stuck here – Ganesha. He is called ‘Mahaganapathi’, and he is shown here in standing posture, a form he is seldom seen in. Moreover, on his head is a small depression, which is said to be a reminder of Ravana’s blow.

How to Reach Gokarna

Gokarna is located in Karnataka just a few hours from Goa and Bangalore. Although it does not have an airport. Dabolim airport in Goa is the nearest airport about 140 km away. The nearest railway station is at Ankola, about 20 km from Gokarna. Trains from several cities including Mangalore, Mumbai, Thiruvananthapuram, Veraval halt at the station. From the station, taxi services are available for Gokarna. Gokarna is well connected by road.